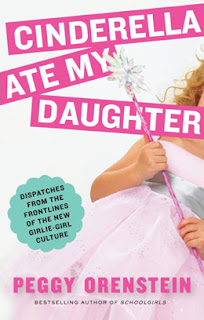 Who could resist a title like that? Although I have read enough "advertising and modern culture are oppressing our children" books to fill a wheelbarrow, I had to read this one too. Orenstein focuses on the pink and glittery girly-girl culture that has risen up since about 2000--I actually didn't realize it was so recent, since my own daughter was born in that year. I've never really seen a toy store without swathes of pink glitter everywhere.

Did you know that Disney Princess merchandise only dates from 10 or so years ago? I didn't. Apparently Disney's merchandising department wasn't doing too well until someone noticed that little girls were all wearing homemade princess outfits. And why let people sew their own when you could sell them one with a character on it? Five seconds later you could buy absolutely anything with a Disney princess on it.

The analysis was mostly fine, if not terribly surprising. She covers the rise of Disney princess mania, toddler beauty contests (happily with more depth than usual), and media for older girls such as Hannah Montana and online culture. I read the book quickly and with great interest. I was kind of irritated by Orenstein's thoughts about American Girl dolls, though. She complains about the high prices and plethora of expensive accessories and clothes, even as the books try to push an anti-materialistic message. I can understand her annoyance at the price tag (that's why I've never bought the furniture and sew all the clothes myself), but in just the previous chapter, she praises the high quality of Shirley Temple dolls, noting that during the Depression they cost four times as much as other dolls--just as American Girl dolls do today.

The section on neurodevelopment in children and why little kids get obsessed with defining things as 'boy' or 'girl' around age 4 was quite interesting. I think I learned most there. One side-effect of that chapter has been to get me thinking a little bit about those folks who pop up every few years with a baby whose gender they refuse to reveal. I always thought this was a harmless--if slightly silly--experiment, but knowing a little more about how children come to define themselves, I'm now wondering if it isn't a pretty bad idea.

If you have a daughter, especially a small one, this is a reasonable book.
52 books