Theme Thursday is a reading meme hosted by Reading Between Pages. I'm not in the habit of doing these, but today I'll give it a try:

Theme Thursdays is a fun weekly event that will be open from one thursday to the next. Anyone can participate in it. The rules are simple:

As we are winding one year, we will hopefully cast away everything that is old and look forward for a brighter and more prosperous year. So look for the word OLD or anything that symbolizes it. (worn out, torn, past etc) 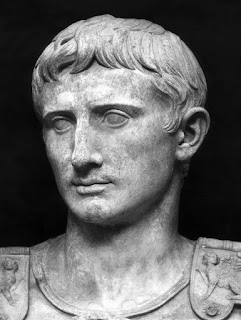 about something old in The Classical World, a giant history that spans from early Greek times to the reign of the Roman emperor Hadrian. It's by Robin Lane Fox. In a chapter on Roman society during the reign of Caesar Augustus, Fox says:

"A reassertion of ancient dignity would appeal to new men who were newly arrived in high places; it persuaded them, Catos and Ciceros at heart, that their new eminence was indeed as sound and traditional as they had expected...He [Augustus] later wrote how he had brought back 'many examples of our ancestors which were disappearing from our age.'"

Augustus spent a lot of time trying to bring back old mores and encourage fertility; after 20 years of civil war, the population needed replenishment.
fun