Week 51: The Secret Life of the Grown-Up Brain 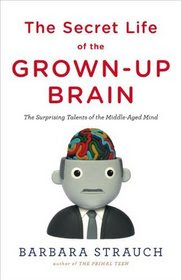 The Secret Life of the Grown-Up Brain, by Barbara Strauch

Until quite recently, no one was really studying the ordinary adult brain. Scientists mainly studied children's development and the decline of mental abilities in the elderly. We made a lot of assumptions about how the adult brain works, and it turns out that many of them are wrong.
Adult brains are much more malleable than researchers had realized. Instead of starting a slow decline in adulthood, middle-aged adults can synthesize knowledge and draw on years of experience. They are calmer and happier, even if a bit slower and more scatter-brained. They can grow new neurons (exercise is especially good for this) and possibly even stave off the effects of Alzheimer's through education and interaction.
So this was a very interesting book with a lot of new science to learn.