The Rivers of London series

By Jean - February 21, 2020
Rivers of London series, by Ben Aaronovitch 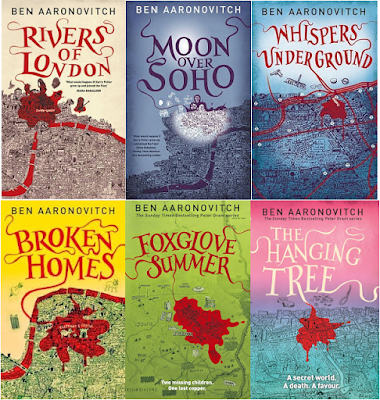 Last summer, I posted about Midnight Riot, the first in the Rivers of London series by Ben Aaronovitch.  Since then I've been getting the other books in the series through the magic of ILL, and sometimes a small Kindle purchase.  I'm finding that they're not that easy to come by in the US, but they are so much fun, it's worth it to pursue them.

Peter Grant is just a regular London copper until he and his partner run into a murder witnessed only by a ghost.  Constable Grant is then launched on a strange career in the small and unpopular department known as "Falcon," which handles the weird stuff -- anything having to do with the minor gods, Fae, and various supernatural phenomena -- and involves training as a wizard. The head wizard is Nightingale, the only practising wizard left in the UK...or so he thought.  Turns out that not only is magic increasing, it never went away and there are some very bad practitioners out there.

Constable Grant deals, through several novels, a couple of novellas, and a whole parallel series of graphic novels, with ghosts, haunted BMWs, invisible unicorns, and more mundane events such as kidnappings and drug overdoses.  Not to mention pressure from Lady Tyburn (a river goddess), the exasperation of all his colleagues, and a betrayal or two.

So far I've read up to #6 of the main novels, The Hanging Tree.  The next story, "A Rare Book of Cunning Device," is a short story only available on audio, but well worth getting, because it's set in the British Library.   I hope to get hold of #7 soon, and #8 is supposed to come out later this year.  I also got hold of the first graphic novel, Body Work, and that's very good too.  The story works really well as a graphic novel.  I don't know that I'll read all of those, just because graphic novels aren't cheap, and I am.

I'm enjoying these a lot, so I do recommend them if you like both fantasy and mysteries.  They're like a cross between CSI and Harry Potter, as if you had an Auror embedded in the London Metropolitan Police.  Lots of fun. 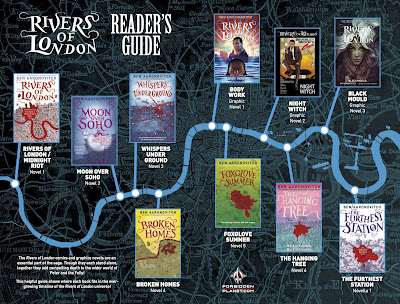