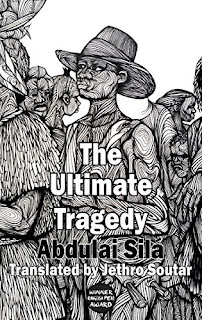 The Ultimate Tragedy, by Abdulai Sila

This novel is from the West African country of Guinea Bissau.  Written in Portuguese, it's the first to be translated into English from that country.   Guinea Bissau used to be known as Portuguese Guinea until its independence in 1973, and this novel is set during that colonial period, but I'm not sure exactly when.  I was imagining sometime in the 1950s or 60s.

Ndani needs to leave her village; the djambakus (a religious leader) decided that she has an evil fate hanging over her, and she is blamed for anything that goes wrong.  So her beloved stepmother advises her to go look for work as a housemaid in the city, so she can get away.  Ndani spends a few years working for Dona Linda, who eventually develops ambitions to be a leader in local religious affairs.  Her husband, however, has different ideas.

Ndani leaves and ends up in a nearby village, where the chief plans to make her his sixth wife.  Instead, she meets the local teacher, and for a short time they find great happiness together, but it can't last.  The times just won't allow it.

This is an unusual novel, in that it jumps between viewpoints with no warning, and in large chunks.  The first part is Ndani's story, and it jumps to the village chief just when you least expect it.  Then it jumps again to the teacher, again at an unexpected point.  So the reader has to figure things out a bit.  It's a really good novel and I'm very glad I read it; I found it difficult to put down and read it in just a couple of days.
African literature read around the world