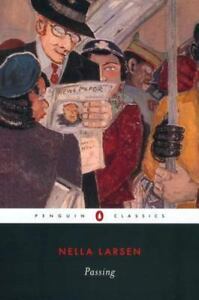 It took me a while to get to one of the great Harlem Renaissance women writers, and I got there kind of backwards, but here I am at last.  Nella Larsen was born in the US, but her mother was Danish and her father was from the Danish Virgin Islands (Denmark had a colony there from 1754 - 1917, at which point it sold out to the US).  She worked as a librarian (yay!) and then as a nurse, and also wrote works which weren't as appreciated at the time as they are now.  She's now considered one of the major writers of the Harlem Renaissance (or so says my book).

I first heard of Larsen because she was the person who circulated a copy of the Danish author J. P. Jacobsen's first novel, Marie Grubbe, around her literary circle, which wound up sparking a truly great novel.  (See my post for details on the story, which I think is really neat.)   And so I've been wanting to read Larsen's own work for a while.  Passing has been on my TBR shelf for nearly a year.

This is a novella, and worth reading in just one sitting, as I did.  It's divided into three parts, rather like a drama.  There are also three women involved (though one is more of a minor character).  And it's set in the 1920s, at a time when the color line was very clearly marked...or was it?

Irene Redfield is out shopping and decides to eat in a fancy restaurant; she can pass as white, though she doesn't often -- at home, she lives embedded in the black middle class, with an ambitious doctor husband, sons, and many social duties.  At the restaurant she meets an old childhood friend, Clare, who disappeared in her late teens.  Clare is ravishingly beautiful, and confides that she has been passing for years.  She is married to a man who doesn't know her family background; it would be dangerous for him to find out.  But Clare has been so homesick for her old neighborhood that she came to town in hopes of meeting someone to hear the news.

Irene is reluctant to get involved with Clare, but the women become deeply entangled.  Over a few years, Clare visits often, carelessly courting danger.  Irene, meanwhile, is holding her home together by force of will and denial.  None of this can last.


This is a powerful and absorbing novel, with wonderful characterization.  Larsen explores many different angles of passing, as well as other aspects of racial issues in the 1920s.  The end comes as a shock, and apparently people argue over exactly what it means and what happened.  I have a definite opinion about that (in fact, it seems quite clear to me).  On the other hand, apparently people also argue over whether there are themes of bisexuality embedded in the story, and I didn't see any.  Erica kindly informs me that Larsen is said to have struggled with her own sexuality, which was handy since my book did not tell me so.

It's a classic of the Harlem Renaissance and a wonderful novel, so put it on your list.