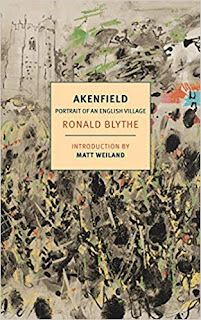 Akenfield: Portrait of a Country Village, by Ronald Blythe

In 1966 - 67, Ronald Blythe set out to collect oral histories from the older people in and around his home village (which is actually Charsfield and environs) in Suffolk.  Suffolk people being famously taciturn and private, it took a familiar person to get these interviews.  Mostly what Blythe did was to listen to whatever the people had to say about their lives; he presents them with a description of the person, but little commentary from his own point of view.  The result was a stunningly vivid collection of people's thoughts about their own lives and experiences.  It was hailed as a modern classic upon publication in 1969.

At the time, it was an unusual sort of book; now, of course, we collect oral histories regularly, and Svetlana Alexievich has brought the form to new heights.  But in 1969, while people thought Akenfield was wonderful, they weren't sure what to call it.

We find portraits here of all sorts of people, though they are chiefly in agriculture of some kind.  The blacksmith, the schoolteacher, the magistrate and all sorts are also represented.  Laborers and owners, veterans of WWI and II...it's a wide variety.  Nearly all of them have experience of grinding poverty and endless hard work.  They talk about their love of farming, or of the relative merits of sheep, cows, and pigs.

There are remarkably few women featured in the book, and yet their stories are some of the most fascinating.  I really wished that Blythe had talked to a lot more women (yay 60s sexism?).  My favorite was certainly the retired district nurse, who had started working in the village in 1925 and knew everyone inside and out.


Certainly people were more neighborly then.  They went in and out of each other's houses to help with what was needed, and thought themselves well-paid with a cup of tea, yet it wasn't better than it is now.  It was worse, much, much worse.

Children have never been as beautiful as they are now...The old people were not taken care of...Things were more or less hidden -- all life was hidden -- and then, of course, it was difficult to move the doctors.  They didn't bother too much....People weren't worried about these conditions because they were the only ones they knew.  They were natural but bad.

This is a theme that runs through the entire book, actually, but the nurse expresses it best.  All the older folks agree that even with the disadvantages that come with modern life, everything is much, much better than the old days, and nostalgia is just willful blindness.

The strangest thing about the interviews is that some things that we would find utterly horrifying are, while disapproved of, taken for granted a bit and not thought to be as harmful as we would consider them to be.  The book's introduction calls some of this "disturbingly frank," which about covers it.

It's a truly captivating read, a peek into another world -- other people's lives, and ways of life which are now gone.  It makes an excellent bedside book, since each interview is several pages, but there's not much continuity between each one, and so it's good for dipping into.  I'm so glad I found a copy of this book describing a little corner of the world.
English literature history memoir/biography TBR challenge