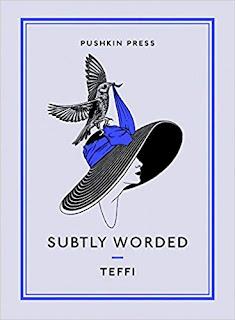 I didn't know anything about Teffi, and that turned out to be a real shame, so I'm going to give you a quick rundown.  Teffi is a Russian author not to be missed!

Nadezhda Alexandrovna Lokhvitskaya, married name Buchinskaya, lived ~1872 - 1952.   She became an established writer of great popularity in the early 1900s -- everybody liked Teffi, from Tsar Nicholas II to Lenin.  Teffi mostly wrote short stories, sparkling satires and tragicomedies that often seem like comedy until you look again.  Some of her works were not very friendly to the tsarist government, and in 1917, she was a supporter of the October Revolution.  She soon realized that the Bolsheviks were not what she hoped, and escaped to Istanbul and then Paris, where she spent the rest of her days, along with so many other Russian émigrés.  She continued to write her short stories until the end of her life.

Subtly Worded is a survey of Teffi's short works, including selections from every period.  I think it was an ideal introduction to her.  The pre-Revolution stories show little vignettes of everyday life, from a little girl whose world is crumbling along with her parents' marriage to a young lady enamored of her new blue hat.  There are also a couple of notable pieces that are not fiction, but  accounts of Teffi's encounters with Tolstoy and Rasputin.

Stories from 1920s and 30s Paris satirize the lives of the many émigrés, and the title story, "Subtly Worded," is a darkly comedic primer in how to write letters to old friends still in Russia.  The final stories come to terms with life, and imminent death.

I will definitely be reading more of Teffi, who deserves wider fame than she already has.  These stories are wonderful.