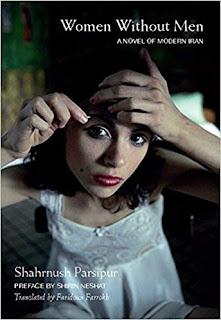 Women Without Men, by Shahrnush Parsipur

It's 1953 in Iran, and it's dangerous out there.  But that's only the backdrop to the stories of five women from Tehran who all wind up in the same villa, in a pretty little town next to a river, where very unusual things happen.  This is a magical realism kind of novel, in fact.  And it also became a famous film.

Mahdokht used to be a teacher, but now she just wants everything to be in harmony, so she plants herself in the villa's garden and waits to bloom.

Fa'iza goes to see her friend Munis, who she doesn't actually like very much.  (She's hoping that Munis' brother will notice her.)  The two women's lives become intertwined, even though Munis has died a couple of times and can now hear the thoughts of others...they end up together at the villa.

Farrokhlaqa, middle-aged housewife, is now a widow with ambitions in local politics.  She lets the others live with her in her new villa, and tries to write poetry.

Zarrinkolah, forced into prostitution as a girl, is now in her mid-20s and is worried by the fact that for the past six months, none of the men she has seen have had any heads.  She finally runs away and fetches up at the villa, where she meets the Kind Gardener; it's a great relief that he has a head, even if he doesn't have a name.

Now that everyone is living at this villa, things are more peaceful for them, but everything just gets more strange.  The women do not settle into a harmonious, idyllic existence or anything like that.

It's a very interesting novel, and I read it all in one evening, because it's also quite short.  I liked it.
Middle Eastern literature modern fiction