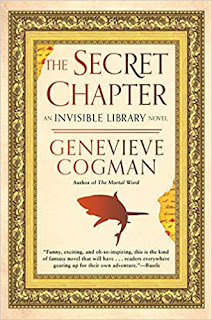 The Secret Chapter, by Genevieve Cogman

I've enjoyed the whole Invisible Library series.  This one is #6, and for some reason I felt like it was going to be a wrap-up volume.  I was very wrong!

Irene, librarian, has brokered a sort of peace treaty between the dragons and the Fae, but it's not complete quite yet.  She also has a new assignment: the world she spent her school years in is veering towards being more chaotic and in control of the Fae.  To stabilize her former home, she'll have to collect a book from that world -- a unique version of an ancient Egyptian folktale -- which is in the possession of Mr. Nemo, a very powerful Fae who has not signed on to the peace treaty at all.

Mr. Nemo lives out the archetype of a super-criminal boss; think James Bond villains, elaborate hidden lairs, and infinite resources with which to carry out complicated heists.  He offers Irene a deal.  If she and her dragon partner, Kai, join a team to steal a painting from a museum, she can choose her reward.  The rest of the team consists of various Fae criminal types...and a dragon.

The action and intrigue is non-stop, and the really nice thing about this story is how it opens up possibilities at the end.  Instead of winding down the story, this volume cracked it wide open, and I'm going to be really excited to see what happens next!  Unfortunately for me, this volume was only just published, and I'm going to have to wait a while.

The Invisible Library series is well worth reading if you like complicated parallel worlds, bookish themes, and lots of adventure and scheming.