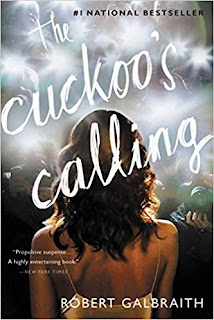 I've always kind of meant to give Rowling's mysteries a try.  After all, I love mysteries, and I enjoyed Harry Potter just fine, and everybody seems to like the Galbraith series.  So I finally picked up a copy and read this, the first in a series about private detective Cormoran Strike.  I'm probably the last person on earth to get around to it!

Cormoran Strike's life is pretty much a garbage fire.  The private detective agency business he founded is on the brink of insolvency, he's just broken up with his fianceé (for good this time, he's sure), and that makes him homeless so he has to sleep in his office.  The temp agency has sent over a new secretary, Robin, and he can't even afford that....and then John Bristow walks in and offers Strike a whole lot of money if he will investigate his sister's death.  Lula Landry was the biggest supermodel in the UK, and her fall from her apartment balcony was ruled a suicide, but Bristow is sure she was murdered.  Strike thinks Bristow is completely wrong, but he agrees to look at the case anyway, and while murder seems impossible, there are just a few tiny indications that it might not have been a suicide after all.

Strike follows Lula's elusive trail through paparazzi, the rich and famous, rehab and a homeless shelter.  There is a lot about designer clothes and other accessories (both good and bad) of life as a supermodel.  It helps to be interested in clothes, though there is some humor as Strike finds it all hideously ugly.

I did enjoy this mystery pretty well, but I also felt it was too long.  The story could usefully have been condensed by a good hundred pages.  450 pages is quite long for a mystery, and I did feel that this one lagged.  I was frustrated with how long everything took, and while I'm interested in what happens to Strike and Robin, I'm not sure I want to invest so much time in them.  In fact, I just looked at the other three books in the series, and each is longer than the last.  The fourth is over 600 pages (!!).  I felt that Rowling needed a stern editor in the last couple of Harry Potter books, and I think that applies here too!

To be fair, this isn't really a traditional "mystery" as usually defined in the genre.  Strictly speaking, a mystery is supposed to play fair by the reader, giving enough clues to solve the puzzle and not letting the detective have a bunch of secret information that's crucial to the case.  Strike knows several things the reader does not, and I don't think it would really be possible to figure out the puzzle.  So this is more like a novel that's a thriller or a character study of a detective, not quite a mystery in the usual sense.  (This isn't something I worry about for myself; I enjoy going with the flow of the story and not worrying about solving the puzzle before the end.  I just thought it was worth noting.)

It was fine, but I didn't think it was great.