The Long Utopia and The Long Cosmos

By Jean - March 04, 2018
The Long Utopia and The Long Cosmos, by Terry Pratchett and Stephen Baxter

I finished the Long Earth sequence just in time for March Magics! These are the last two in the series of five, and Baxter notes at the beginning of the last volume that, sadly, he had to finish the last one on his own.  It's a nice tribute. 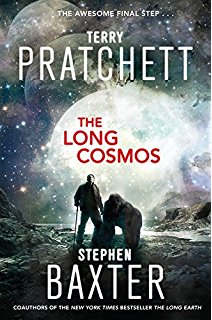 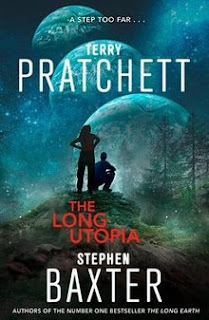 The Long Utopia, again, jumps a decade or so forward and has several storylines that follow our protagonists.  Joshua, is learning about the father he never knew and some weird family history, and he's also called to find out about a new phenomenon -- the Next, superintelligent (and not terribly empathetic) humans who are no longer quite human, and who get together to build their own society and discuss: what to do with the regular humans?  Maybe cage them for their own good in a utopia?  Lobsang has retired to a remote world and is trying to live as a human with a family, but he winds up running straight into a problem that requires Next help.  Alien insects have discovered his world and are mining it from the inside.  What if these aliens discover the rest of the Long Earth?

In The Long Cosmos, a message is broadcast along the entire Long Earth: "Join us."  Join who?  The Next figure out that the message contains instructions for building a massive artificial intelligence machine, but they need human help to do it.  Is this a good idea, or not?  Joshua, meanwhile, is about 70 and goes on one of his lone treks -- but this time he gets smashed by an animal and is saved by a troll band.  Living with them, he learns previously unguessed-at aspects of their society and discovers yet more strange worlds.  Then the final adventure: stepping to alien planets with the help of the Machine....

One interesting aspect of both books is an emphasis on replicators; AI machines that can reproduce themselves.  The alien insects seem to be replicators, possibly ones that have gotten out of control.  An English teacher decides to bring Shakespeare to the entire Long Earth, and uses a self-replicating book to do it, but he doesn't quite grasp the implications.  And the Machine becomes self-building after a while.  I like how Pratchett and Baxter look at several different replicator possibilities.

This is a great sequence of novels, one I really enjoyed, and I think most of my family members would like it too.  Now if I could just get them to read it...
DWJ Month SF/fantasy