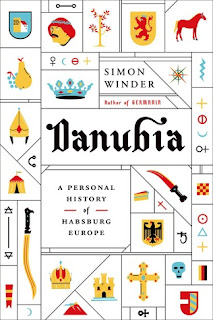 Last year I read and loved Germania, Winder's book about all the things he likes about Germany and its history.  That book led to this one, in which he tackles the absurdly impossible task of explaining the Habsburgs -- the European dynasty that ruled huge (and varying) swathes of Europe for centuries, from Rudolf I in 1282 to the fall of the Austro-Hungarian Empire after World War I.  Luckily for all of us, Winder does not even try to cover everything; this is an "interesting bits" selection.  It's still 500 pages long, and I ran out of steam about halfway through and left it alone for a little while before picking it back up again, but it's a highly entertaining 500 pages and just as good as Germania.

(Note: This kind of stuff is right up my alley, and Simon Winder, if you ever read this, I would like to volunteer for a job as, say, secretary.  I would happily wander around Brno looking at old churches and residential neighborhoods if anybody wanted to pay for my trip.  Just a thought.)

After an introduction, Winder sticks mainly to a chronological telling, and he pretty much just romps around visiting castles, inspecting weird curiosities, and talking about the Ottoman Empire.  It's impossible to really wrap your mind around all this stuff, so it's best to just relax and enjoy the scenery while you're carried along.

I've said before that Winder writes a style similar to Bill Bryson's except much, much better, more fun, and without the complaining, whinging, or endless beer-swilling.  This is still true, and what's more, he's very entertaining, with a gift for phraseology that regularly has me laughing, collaring passing family members to force them to listen to choice paragraphs, or, equally, pondering the pitfalls of nationalism.

The pitfalls of nationalism are really the underlying theme of the book, or at least the second half of it (the first half being mostly given over to a lot of fighting and killing).  Over and over in the 19th century, we see small(ish) and nervous ethnic groups, afraid that they'll be overwhelmed and crushed by massive waves of Germans and Slavs, turn to their histories to look for noble origins to be proud of, folk designs and costumes to use, and music or literature to assert their identities with.  It all seems quite harmless, laudable, and pleasant at first.  I'm all for folk embroidery and literature and Bartok, and it seems sort of undeniable that slicing Poland into three parts was a rotten thing to do.  From an American perspective, it's interesting and fun to read dubious legends about Magyar descent from the Huns.  All too easily, however, all this folklore and poetry and longing for the beautiful motherland tips into ethnic rivalry and calls for national autonomy (and of course, the obligatory anti-Semitism).  And incredibly soon, that turns into war, pogroms, ethnic cleansing, and genocide.

Winder shows us these knotty problems, but can offer no solutions.  I don't think there are any.  The Austro-Hungarian Empire was one attempt at a solution of sorts -- it was a good deal more tolerant than its neighbors, even to the Jewish people -- but nobody liked that either.  You'd think the entire 20th century would teach us not to do this, but we're seeing exactly the same sort of thing happening again now.  Yes, it's happening across Europe, but America is seeing a rise in what we now call identity politics too.  To some extent, it's good and laudable to take pleasure in your roots or your identity; but it's also dangerously easy to take it too far.  I think we can see some parallels between late 19th century Austro-Hungary and our current American climate.  Maybe we ought to be more careful about that.

The nationalism theme has piqued my interest, and so I started reading a Polish national epic sort of thing that was also living on my TBR shelf.  We'll see how that goes.  And a memoir I'm almost finished with has strains of it as well....

On a more cheerful note, let's have some quotations.  I marked so many that I'll have to pick only a few:


[From the introduction]  This hunt for origins became obsessive in the nineteenth century as a literate and aggressive language-nationalism came to dominate Central Europe.  Town squares filled up with statues of heroic, shaggy forebears and town halls became oppressively decorated with murals of the same forebears engaged in i) frowningly breasting a hill and looking down on the promised land; ii) engaging in some ceremony with a flag or sword to found a town; and iii) successfully killing everybody who was there already.  Schools rang to the sounds of children reciting heroic epics.  This was at the same time a great efflorescence of European culture and a disaster as the twentieth century played out these early medieval fantasies using modern weapons.

According to an ancient story, the deeply pious Leopold’s new bride’s veil was blown away and he swore to build an abbey wherever it was found. Years later, while out hunting, he discovered the veil on an elderberry bush and building began. This story features in innumerable carvings and miniatures and can never surmount the problem that a piece of cloth on a bush is hard to represent in an engaging way, a problem generally solved by showing the extra pointer of the Virgin Mary and tons of angels blazing away in the sky above the bush.

In Italian it is called Castel Roncolo, which implies a pretty turfed courtyard with maidens in gauzy outfits skipping about to tambourines and lutes with weedy youths in coloured tights looking on. In German it is called Schloss Runkelstein, which implies a brandy-deranged old soldier-baron with a purple face and leg-iron lurching around darkened dank corridors, beating a servant to death with his crutch.

Venice's quite separate political development from the rest of Italy gave it a certain resistance to Italian nationalism, but this did not for a second imply anything other than loathing for the Austrians.

The Metropolitan Palace, as it gradually took shape in the 1870s, seems to have got completely out of control, the building equivalent of the sorcerer's apprentice unable to stop the spell he has unleashed.  The result is a Burgundo-Hanseatic-Grenadan-Hutsul-Byzantine mishmash of a heroic kind, and a classic piece of Habsburg collaboration: with a patently insane Czech architect, Josef Hlavka, armies of medievally inspired German and local decorators and specialists and seemingly no one doing the budgeting.


I enjoyed this book so much.