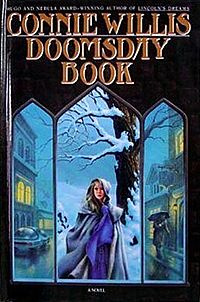 Reading the Chronicles of St. Mary's was fun, but it got me longing to read more about time travel in done in a way that I just like better.  I've only read Doomsday Book once before (as opposed to To Say Nothing of the Dog, which I've read many times) because Doomsday Book will break your heart into bits and then jump up and down on them.  But all of a sudden I really wanted to re-read it, and so I pulled it off the shelf.

In future Oxford, historians can time-travel to observe real historical events, but nobody has ever gone as far back as the Middle Ages.  Kivrin, however, is determined to go and has been training for two years.  She's got it all planned out and will stay for two weeks, seeing the Christmas of 1320.

Nothing goes right.  Kivrin falls ill as soon as she arrives, and as all of future Oxford falls to the same influenza virus, they can't get her back.  She takes shelter at a small manor where the family is hiding out from an unsettled political situation.   We alternate between an epidemic in Oxford and a much worse one in the past, because Kivrin has not gone to 1320 at all.  She has arrived just in time for the plague.

Probably one of the greatest SF time-travel novels ever written.  Read it, but keep your Kleenex close at hand.

Incidentally, over the weekend I visited the antiquarian book fair in Sacramento, where all the book dealers for two hundred miles around congregate to show off and sell their best stuff.  I saw a first edition of Doomsday Book, with the above cover, for a few hundred dollars.  Right below it was a nice set of the unauthorized Ace paperbacks of the Lord of the Rings, which I was inordinately pleased with myself for recognizing.  There was all sorts of great stuff, even a few actually antiquarian pages of incunabula.  (The "antiquarian" is not so much a strict rule as it is a warning that it isn't a Scholastic book fair for children.)  We just went to see what it was like, and it turned out more fun than we had anticipated! 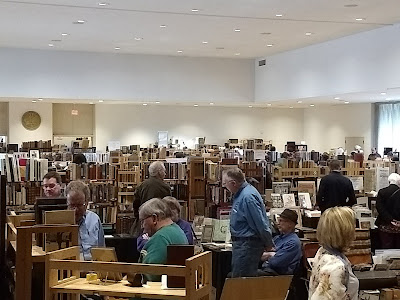