March Magics: Stopping for a Spell and other younger stories 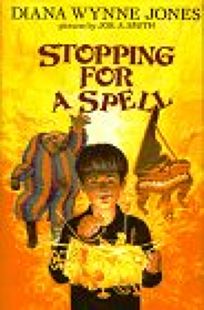 Stopping for a Spell and some other stories for younger ages


I thought I'd write about most of the younger stories all at once.  I started with them and figured on working my way up in complexity.

Stopping for a Spell has three stories, and I think they must have started off as bedtime stories for little boys who wanted a lot of laughs.  DWJ, after all, had three boys, and she said they always wanted funny stories.  "Chair Person" brings a family's hideous old armchair to life, "The Four Grannies" features Erg, who accidentally turns his four bothersome grannies into one great big Supergranny, and "Who Got Rid of Angus Flint?" has a horrible houseguest who is finally evicted by the fed-up furniture, since nothing less will shift him.

None of these are big favorites of mine, but I can imagine little boys in pajamas absolutely screaming with laughter over them.  They all feature outside intruders into family life, and the horrified parents are usually kind of helpless in the face of ridiculously over-the-top antics.  Even the kids can't always prevail! 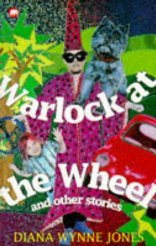 Other stories for younger ages are scattered in Warlock at the Wheel and a couple of other books.

I quite like "Plague of Peacocks," in which a new set of busybody neighbors move into the neighborhood and plague the life out of everyone else.  All the kids depend on little Daniel Emanuel -- once he gets fed up, there's no knowing what might happen.  "Fluffy Pink Toadstool" delivers a comeuppance to a mom who gets a little too into the Natural Lifestyle; this one does make me laugh.  In "Auntie Bea's Day Out," she drags everyone to the seaside and insists on heading out to an island despite the 'danger' signs, and the island dislikes her so much that it tries to get rid of her.  So those are all about awful adults who impose on everybody else and must be dealt with.

"Carruthers" is an odd story.  Elizabeth, rather a bullied kid, adopts an old walking stick.  She misunderstands some things and hopes that the stick will eventually beat her father so he'll stop being terrible, but instead Carruthers just complains and eats a lot, until burglars arrive.  "No One" reminds me a bit of Ray Bradbury; in a house of the future, No One is the robot charged with caring for 6-year-old Edward.  Kidnappers show up and No One organizes a comedic and messy defense with all the AI house appliances.


These are mainly funny stories, but they have their themes too.  DWJ is pretty clear that she doesn't like meddlers; people ought to be left alone to do as they please.  Nearly all of these families are pretty average, pleasant groups of people, if sometimes kind of ineffectual -- if the intruder is a relative, it's nearly always somebody outside the immediate family circle.  "Carruthers" is an exception; Elizabeth and her sisters are really not treated well, the more so because they're girls and their parents have very limited ideas about what girls can do.  I think DWJ put her own family into this story more, albeit very toned down.

I hadn't read some of these for a long time, so I had fun.  Even when they're not big favorites, they're still full of great turns of phrase and insightful moments.  I am particularly fond of Chair Person's smashed-hedgehog beard and the nature-obsessed mother's insistence on floppy hand-woven clothing.
children's literature DWJ Month SF/fantasy