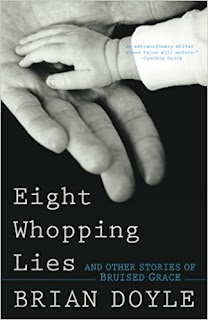 Eight Whopping Lies, and Other Stories of Bruised Grace, by Brian Doyle

Brian Doyle was an Oregon and a Catholic writer; he wrote a lot about Oregon (though he was a transplant from New York), and he wrote a lot about being Catholic, and about lots of other things too.  He does not appear to be terribly famous, but those who know his works love them, and you should try them out because they are great stuff.

This book is a collection of very (very!) short essays, which as far as I can guess he must have put together shortly before his untimely death at only 60.   They were mostly published in the American Scholar, but sometimes in other magazines, like First Things.  A lot of them are about family: about being one of many brothers, or a particular moment with a kid.  Some are about being Catholic.  And a good many are about moments of ordinary life that all of a sudden aren't ordinary at all.

These are lovely and wonderful little pieces of writing, and I highly recommend you try some Brian Doyle today.  You can even do it for free by reading his archive at American Scholar, or these essays at Sojourners, except they want you to subscribe to read more.