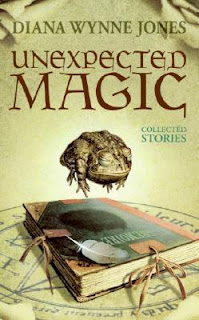 Just a little post to cover some extra bases.  I've been reading Unexpected Magic, the largest collection of DWJ short stories and the only place to find the excellent novella "Everard's Ride" (besides the very rare volume that has it and "The True State of Affairs" -- only Lory has that!).  Most of the stories in this volume are collected in books I've already covered, so this is just the few that aren't, plus another sort of rare story, Wild Robert.

When my husband and I were first married in 1996, we took a trip to the UK and of course, I figured I'd look for DWJ books.  A friend of ours, also a diehard fan, asked particularly for us to look for Wild Robert as his copy had been lost in a house fire.  Luckily we were able to buy two, and I'm not sure I've ever seen it again.

"The Green Stone" is a very short story with a fun punch at the end.  It's one where DWJ is playing with the fantasy trope of a 'tour,' where a crew goes on a quest.  So it's quite reminiscent of Dark Lord of Derkholm or The Tough Guide to Fantasyland, except that it's only a few pages long.  "The Fat Wizard" is another short, funny story, in which the pompous town wizard and the narrator's pet pig run into each other.  Another good bedtime story!

"Little Dot" is a cat story, but it's my favorite cat story, and it reminds me just a little of Neil Gaiman's The Ocean at the End of the Lane, which was itself a tribute to DWJ, so I have to wonder if the two are connected.  Little Dot is a cat with a benevolent wizard who is working on helping local farmers trap a strange beast that is prowling around the hills.  She and her fellow cats have to save their wizard, though. 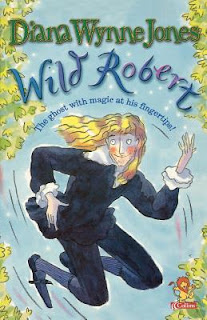 Wild Robert is a short children's novel, and I think it's rather different, not quite your usual DWJ story.  And it's illustrated, unlike most!  Heather's parents are caretakers at a historic stately home, and when Heather is quite fed up with trippers in all her favorite spots, she winds up at a hummock that the locals say is haunted.  And so it is; Wild Robert Toller was buried there three hundred years ago, and Heather accidentally calls him up.  Robert is not happy to see his home covered in visitors, and produces some witchcraft to solve the problem.  He has every intention of seeing to Heather's dad -- clearly an interloper who is cheating the family -- next.

What I like about Wild Robert is the way that Robert is both a real problem and a truly sympathetic character.  He's had a rough time, and he also has a volatile character that has been the source of some of his difficulties.

Next up: two of the greatest DWJ short works! 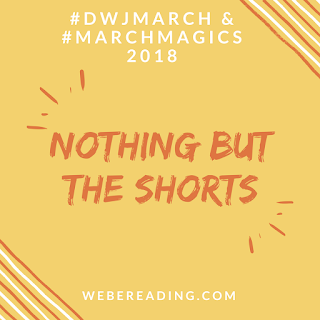