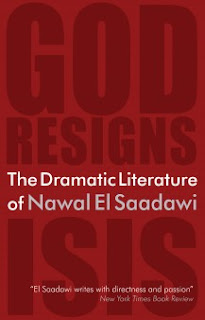 Nawal El Saadawi is an Egyptian writer (and physician too) who has been fairly prolific over her long career.  She has focused a lot on women's issues -- FGM in particular -- and has been imprisoned and exiled for her anti-religious and feminist writing.  Until I started writing this post just now, I was under the impression that I had read one of her novels in the early days of this blog, but it seems our library did not own her works at that time and I didn't read it after all....so I'm a newcomer.

Isis is the earliest of El Saadawi's seven plays and was written in 1986 in Egypt.  El Saadawi seems to identify a good deal with the ancient Egyptian goddess; she titled her memoir A Daughter of Isis (as in, she considered her actual mother to be Isis-like), and calls her a "personal muse."

In the play, Ra has taken over all of creation and thrown out Geb (god of earth) and Nut (the sky goddess).  Ra insists that he is the only person anybody may worship, and he uses Seth as his lieutenant and enforcer, making him king of the earth.  Seth is gleeful about his rise to power, but what he really wants is Isis -- and she's what he can't have.  Seth murders her husband Osiris, but instead of submitting, she flees with her friend, the goddess Maat.  They meet a sailor who is maybe the reincarnation of Osiris? and Isis has a son, Horus, with him.  They all live together in a village, teaching wisdom, love, and harmony.

Until Seth finds them.  Isis stands up to him, though he destroys everything again, and then she puts him on trial, insisting on the value of love, mercy, and so on.


It's an interesting play, only translated into English fairly recently, and I don't know that it has ever actually been performed in English.  El Saadawi is trying to bring Isis back into prominence in a way that she feels is more true to how ancient Egyptians saw her, rather than how history has treated her -- mostly as Osiris' wife with no real presence of her own (or at least, this seems to be how El Saadawi sees it; I'm not at all sure that I agree about historical disregard of Isis).

But I think there's a weakness in the play; or perhaps it's just a function of writing a play that features deities as characters.  Isis is the heroine, and she is completely good.  She is just about the only good character, since Ra and Seth are evil villains, Osiris is a passive foil with little presence, and Maat and Horus are minor supporters  (Maat is kind but fearful; Horus mostly a vengeful son).  There are humans too, and of course they are a little more nuanced, being mostly weak, vicious, or vulnerable.  The result is, I feel, a little flat.  Perhaps that is inevitable with all the gods around.

Isis is clearly an enormously important archetypal figure for El Saadawi, that embodies all that women are able to do, but have so often been denied (perhaps especially in El Saadawi's own experience).  She is a creation goddess, standing for everything from justice and wisdom to art and music.

Now that I've discovered that I haven't read El Saadawi before, perhaps I'll have to read more!