By Jean - March 26, 2018
These are my favorites of the shorts, and I saved them for last!  I hadn't realized how very early they had been written; both date from the mid-1960s, which also accounts for their similar semi-Elizabethan air.  Neither were actually published until the mid-1990s. 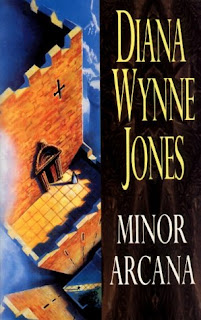 "The True State of Affairs" is written by a modern English woman who has somehow ended up in another world, one in which she is promptly fooled into being a fall guy.  She is now a political prisoner in a late-medieval sort of world where a couple of factions are fighting for dominance, but since the only information she gets is from her jailors, it's really hard to figure anything out.  (The country is called Dalemark, but none of the other names match, so I'm going to presume that it's an early version without too much connection to the Dalemark Quartet.)

From her balcony, she can just see a bit of another prisoner's balcony, and without much to do, they each think a lot about the other.  A few messages are secretly passed; he is courtly, she responds, and so a long-distance romance develops.  It's a fascinating story!

I always imagine all this happening at the Tower of London, and probably featuring Sir Walter Raleigh or some similar fellow.

DWJ stated that she wrote this story after reading the Kingis Quair, a long, romantic poem written by James I of Scotland when he was imprisoned.  (This isn't James I of England, this is nearly 200 years earlier and his several-greats-grand-daddy.)  He fell in love with a lady he saw walking by and wrote her courtly notes.  I downloaded the Kingis Quair last night to read too, and was surprised to see that although SWJ says "Of course it all stopped when he was released," that wasn't the case.  They  married and had eight children!  (Plus, he spent 18 years as a hostage, most of it while he was king.) 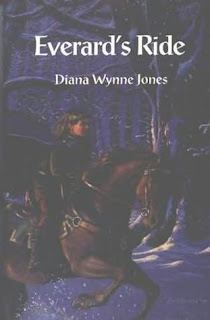 I wish DWJ had written similar information about "Everard's Ride," but as far as I know she did not.  If anybody knows anything, tell me please!

Alex and Cecelia are the mid-Victorian children of a wealthy and socially ambitious farmer, but they live on a seashore near an island...and sometimes, if you go there, you can get to the hidden kingdom of Falleyfell.  Robert, ex-duke of Gairne, shows up on their doorstep one night, having been outlawed, and the siblings are soon thrown into Falleyfell politics, while at the same time contending with their gentry neighbors in real life.  Wow, this story is hard to describe, but it is wonderful.

I particularly like how the story is written as half-novel, half-history, so that there are occasional references to future events -- such as a particular king or something, and as though you, the reader, will know these events perfectly well, just as you would understand a future-history reference in an ordinary historical novel.


Both of these short novels are right up my alley and I wish they were easier to find so more people could read them.  If you never have, you are in for a treat!
DWJ Month SF/fantasy