The Chronicles of St. Mary's (I and II) 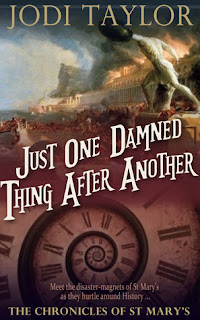 Just One Damned Thing After Another and
A Symphony of Echoes, by Jodi Taylor

These two books about time-traveling historians came across the donation table, and I nearly didn't take them, but then I did.  They turn out to be the first two books in what is now quite a long series, The Chronicles of St. Mary's.  They're more adult fiction than YA; that is, everybody in it is over 25 and it just feels more like adult fiction, plus people die at a fairly high rate.  The back blurb calls the series "madcap," so watch out, I guess.

Max is a historian with no family ties, which makes her a perfect recruit for St. Mary's, an outfit that secretly does historical research in person.  Max's training and first big assignment comprise the first book; she becomes close with all the other trainees and, once qualified, she and her partner head off to the Cretaceous to study actual dinosaurs!  But!  Tyrannosaurus Rexes are not the only danger.  St. Mary's has an enemy who is not above using history as a weapon. 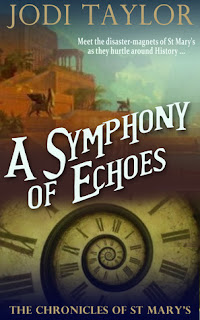 In the second volume, Max starts off trying to catch a sight of Jack the Ripper on his last night of action, moves on to Thomas a Becket's murder, and ends up on a long assignment with Mary, Queen of Scots.  That's the tricky one; somebody is trying to introduce an anomaly into History, which normally squashes anyone flat if they try.

I thought these were pretty good reads.  They are witty and exciting.  The foreshadowing is on the heavy side; every other chapter ends with some version of "if only I had known that my world was about to be torn apart."  This happens far too often.

Time-travel books tend to have this problem of how to not mess with history.  If there isn't some mechanism to protect History as we know it, then the baddies can loot everything and the goodies can kill Hitler.  Taylor solves this in much the same way that Connie Willis does in her time-travel books; History simply doesn't allow meddling, and if something does go wrong, it corrects by any means necessary.

I'm not sure if I will read more of this series.  It was pretty good, but I don't yet know if I want to read more.
SF/fantasy