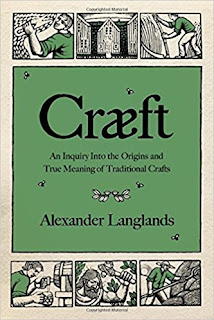 Craeft: An Inquiry Into the Origins and True meaning of Traditional Crafts, by Alexander Langlands

I got wind of this book when it was published in the UK because I subscribed to the Heritage Craft Association's Facebook page.  (Why did I do that?  Who knows, it's interesting!)  I've been waiting for it ever since, and I finally got it.

Alexander Langlands is a British archaeologist who I gather is fairly well known if you pay attention to these things.  He started off as a jobbing archaeologist (because in the UK, you have to pay archaeologists to check out the ground if you want to build anything; who knows, maybe Richard III is down there) and then did a bunch of things for the BBC that I would probably enjoy watching, like Victorian Farm and Edwardian Farm, only I never seem to have time for much TV.  So he's the kind of guy who really likes to do things like thatch roofs or learn how to mow hay with a scythe.  And that is what this book is about -- Langlands' efforts to learn how things were once done, and whether traditional crafts have any place in the modern world.

Obviously a book like this can very easily fall into the trap of overly romanticizing the past, and it's true that Langlands does not spend a lot of time on the bad parts, but he does do a good job of not falling into tweeness.  His focus is on figuring out exactly how things were done, and then seeing if he can do them too and (as long as we're here) pondering on their practical implications today.  So there is not a lot in the way of soft-focus descriptions of the joys of haymowing.

Chapters each deal with a different craft used in the UK: making hedgerows and drystone walls, haymaking, pottery, thatching, boatmaking, and so on.  Langlands has mostly tried them out himself, or studied them at least -- making a working pond seems to be an unrealized dream -- and he writes great descriptions of the tremendous skill and work that goes into them.  There is even a section on burning lime, which made me happy, because lime has always puzzled me and now I know a lot more about it.  I also liked the sections on leather, beekeeping, and thatching.

These are mostly masculine sorts of crafts; the weaving chapter veered off to weaving fencing out of wood pretty quickly, to my annoyance.  There is a good bit about beekeeping (frequently part of a housewife's work), and a chapter about basketry, but personally, I would happily read a companion book about womanly crafts, because this book mostly doesn't get into those.  That's OK; crop rotation and haymaking are important.

So, what can we learn from these older crafts to bring into the modern world?  Langlands isn't a romantic, but he does point out that our assumptions that concrete and gas-powered tools are inherently better do not always hold up.  If you can learn to scythe your weeds just about as fast as you whack them with a weedwhacker, can you really say that the quieter, cheaper, and less fussy scythe isn't just as good?  Isn't a pretty, long-lasting and well-designed basket just as good for the job as a plastic box...and when it finally breaks, isn't it nice that it just breaks down and doesn't have to be disposed of?

I had a good time reading this book, and I'm a little afraid to let my kid read it, since she will immediately want to do all the things.  (She already mentioned that she and her buddy had wanted to burn lime; they didn't know that the off-gassing is toxic!  Luckily they never had a chance of getting their hands on limestone.  Phew.)  If we lived in the UK, we would join the Heritage Craft Association!
history non-fiction