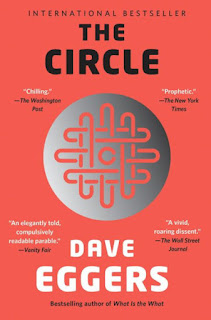 The Circle, by Dave Eggers

Twenty minutes into the future, Mae is the newest hire at the hottest Internet company on Earth -- the Circle.  The Circle is like Google, Facebook, and all your business combined online; it makes everything super-easy, but you have to use your real identity.  No more passwords or 37 different accounts to remember, but also no online anonymity.  No more identity theft (this part is more than a little hand-wavy).  Mae is thrilled, and grateful to her best friend Annie, who is now at the top of the company and got her the job.

The Circle's leaders are very into transparency; everything should be open and seen.  Mae starts to move up in the company, and pretty soon she becomes famous worldwide when she goes 'clear,' wearing a broadcasting camera at all times.  She loves the fame and attention, and she gets sucked into the Circle's goal of seeing everything, all the time.  Even as she loses friends and family, she believes.

Mae is not much of a character.  She doesn't seem to have much (if any) personality; she is endlessly malleable to the Circle leaders' ideas.  Some of the things she accepts without question are just not believable.  She is a standup cardboard figure, built to carry out Eggers' message. 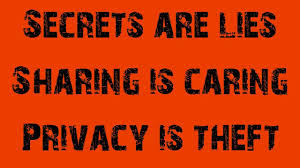 I was kind of bugged by the way Mae just keeps adding more social media responsibilities.  She starts off with a job to do, and the Circle campus is jam-packed with events, parties, and workshops, so she is supposed to attend a lot of those.  Then she's supposed to spend hours a day on social media, participating and being visible.  Then they add a constant stream of survey questions into her headphones, and ever more.  I felt hemmed-in and suffocated once she got to the social media requirement, as I was supposed to do, but when they added the surveys I quit suspending my disbelief.  I don't think an actual human being would be able to sustain all that stuff, even for a day.  Eggers has her learning to find it soothing, but I think he piles it on too much.

I wasn't swept off my feet.  At first, I zipped along, but pretty soon I was reading about two pages a day because I just wasn't enjoying it.  Eggers has some good points, but he's also heavy-handed with them, and he ignores anything -- like hackers, HIPAA, and privacy/legality concerns -- that gets in the way of his dire warnings.  I guess there was a movie and it didn't do as well as people thought it would.  I'd skip it if I were you.
modern fiction SF/fantasy