1. What book has been on your shelf the longest?  I have a lot of books that were on my shelves when I was a kid; a good number of them really still belong to my parents, only I snitched them (temporarily!).  I read my kids Winnie the Pooh from the same copy I had, so maybe that?  It is entirely possible that I have a few books that belonged to my mother when she was younger -- I'd guess Gift of the Mikado, maybe?

2. What is your current read, your last read, and the book you’ll read next?  I'm just now starting The Return of the King to finish up Brona's LOTR readalong, plus also Stolen Words, about the Nazi plunder of Jewish books.  My last read was Paul Bloom's Against Empathy -- watch for the review within 24 hours!  My next read?  How on earth am I supposed to know that?  That will depend on my mood and what the circumstances call for!  I'm particularly excited about "The Dybbuk," a play by Ansky, and Alamut, by Vladimir Bartol.  Check this: Bartol was Slovenian, and wrote Alamut in 1938 as an allegory of Mussolini.  Yugoslavians saw it as a story of Balkan strife, and then it inspired the video game Assassin's Creed.  I am not even kidding!  How can I not read that?

3. What book did everyone like, but you hated?  The Secret History, by Donna Tartt.  Bleh.  It sounded like I would love it, but I didn't at all.

4. What book do you keep telling yourself you’ll read, but you probably won’t? Well, I have a complete set of Will and Ariel Durant's "Story of Civilization."  I really want to read it, but it's an awfully daunting prospect. 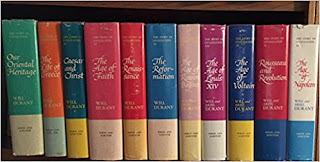 5. What book are you saving for retirement? I suppose Will and Ariel Durant's "Story of Civilization"!

6. Last page: read it first, or wait ’til the end?  Oh, I never peek.  My dislike of knowing what's going to happen has now progressed to the point that I try not to watch trailers for movies I want to see.

7. Acknowledgement: waste of paper and ink, or interesting aside?  Usually I skip past them, but when I do look they are often interesting, especially when I know something about the author.

8. Which book character would you switch places with?   Well, I just read Mrs. Miniver, and she seems to have a pretty great life...but the war hasn't really started yet.  Oh, I know, I'd trade with Tolly Oldknow so I could live at Green Knowe.  Yep.  Really, no other choice could possibly be as good as that! 9. Do you have a book that reminds you of something specific in your life? (Place, time, person?)  Oh, lots!  E. Nesbit and Daniel Pinkwater remind me of lying on the floor in front of a bookcase in our living room when I was a teen.  That was a good reading spot.  Tom Jones makes me think of walking up University Avenue in Berkeley; I lived a 45-minute walk away from campus that semester and would read while I walked to class.  Clarissa makes me think of the same semester, but of the actual house and one of my roommates who was also reading it.  The Quest of the Holy Grail reminds me of a fellow student who approved of Gawain because "he knows his limitations," which I thought missed the entire point.  I never agreed with her about anything.  Loeb editions remind me of Cody's bookstore, and Spellcoats of the Berkeley Book Consortium.  Also, see question #15 below.

10. Name a book that you acquired in an interesting way.  I can't think of anything really fascinating, like buying an ancient dusty tome in an Arabian souk, but looking at my shelves I see a three-volume work on "The Ideals of Ancient Greek Culture" by Werner Jaeger, titled Paideia.  A few years ago, Dwight at A Common Reader did a whole set of posts about it, and I put it on my mental list of interesting possible reads.   Last summer when we did a massive weeding project at work, the set was going to go, so I nobbled it.

11. Have you ever given a book away for a special reason to a special person? Sure, but the story that comes to mind is actually a lend, not a gift.  When I first starting dating my husband, he had fallen out of the habit of reading for fun; a heavy college load and a couple of years working hard in Chile had shoved leisure reading to the side.  I lent him The Dark is Rising, and he remembered loving it long ago, and was just so happy to be enjoying a book again!  Then I lent him Howl's Moving Castle.

12. Which book has been with you most places? Goodness, I don't know.  Oh, but when I moved into the dorms at college, I took only a few books, and one was Gerald Durrell's My Family and Other Animals.  It went to every apartment and house after that, so I guess it's been around.  My husband was carrying it around for reading at some point, and was congratulated on his good taste by a visiting Briton who saw it as a bit of home.

13. Any “required reading” you hated in high school that wasn’t so bad two years later?  Most of the required reading was OK; honestly, my high school was not very good and the reading lists...were not onerous.  I remember doing Fahrenheit 451, some Shakespeare plays, Beowulf, and the 'Rime of the Ancient Mariner.'

14. Used or brand new?  I'll take six of one and half a dozen of the other, please!  I like old books and I like new books.

15. Have you ever read a Dan Brown book?   The Da Vinci Code came out when I was about 8 months pregnant with my younger daughter, and I thought it was an art history mystery.  I like art history mysteries, so I put the earlier book, Angels and Demons, on hold and read it during recovery from a c-section, with my jaundiced baby in a little baby tanning booth by my side.   It turned out not to be an art history mystery at all, but a nutty zoom around Vatican City featuring fancy tattoos and an anti-matter bomb.  It was like a B-movie in book form!  After that, as The Da Vinci Code was making a big hit, every other person I met would ask me if I'd read it and what I thought (this is a common hazard of being a librarian), so I read it too.  Also a B-movie book.

16. Have you ever seen a movie you liked more than the book?   Um.  I have seen several movies based on books I haven't read, but I don't think I've ever both read a book and seen the movie, and liked the movie better.

17. Have you ever read a book that’s made you hungry, cookbooks included?  Someday I would really love to have a butter pie (from DWJ's Tale of Time City).  The Secret Garden has a good deal of yummy food in it.  And almost any Daniel Pinkwater book is guaranteed to make you hungry.  I would love to try a borgelnuskie!

18. Who is the person whose book advice you’ll always take?  My mom and I trade titles all the time, because we like a lot of the same stuff.

19. Is there a book out of your comfort zone (e.g., outside your usual reading genre) that you ended up loving?  One of my first book-bloggy challenges involved reading The Phantom of the Opera.  I've never seen the theater production, never wanted to, and am generally a bit intimidated by French literature, even of the mystery-thriller kind.  I didn't expect to love it, but I did.  Experiences like that cemented my affection for reading challenges!

PS: I know, I know, I'm behind on my memes.  Everybody's doing the personal canon right now.  I'm going to do it too -- I actually started something similar, but more in-depth, a few years ago and then found it to be too much, so I love the idea -- but you know me, I'm always behind the trend.  The good part of that is that you can look forward to a lovely surprise, long after everybody else has already done it!