LOTR Readalong: The Return of the King 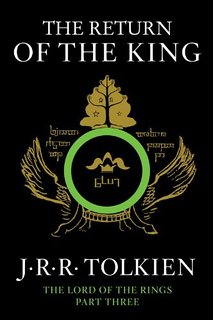 I enjoyed this final installment so much!  It's a very long time since I read it, and I'd forgotten how rich and detailed it all is.  Gandalf is already in Gondor, preparing it for battle.  Aragorn and Theoden are mustering all the troops they can to go fight for Gondor, and it takes a long time, just like real life.  Aragorn decides to go down the Paths of the Dead.  But all of their dramatic fighting (which would normally be the crucial scene) will be useless unless Frodo and Sam get to Mount Doom, and providing cover for them is half the point of all that battle.  Sauron has tremendous resources and is only poking at Gondor so far.

What I really had the most fun with was Tolkien's use of changing writing styles and dialogue.  He just lets himself go in this volume!  People describing battles, or even just talking around the battles, sound exactly like Beowulf, with lots of alliteration.  Gimli is particularly strong with it ("With its own weapons was it worsted!"), but Gandalf and others use it too.  The parts about Aragorn's coronation and the events around that sound straight out of high-style Arthurian tales, but when it comes time to clear out the Shire, everything is straightforward and down-to-earth.  Sam's style takes over, and only the other three Fellowship hobbits talk a little more poetically.

The very end of the story is full of renewal and rebirth for Men, and (most) Hobbits in the dawn of the Fourth Age.  Middle-Earth, much of which has been desolate or blasted since the last war, is going to be repopulated and rebuilt, and it's Men that are going to do it.  Well, mostly.  The Ents have already started at Orthanc, having turned the whole ugly, mechanical gouge in the earth into gardens, orchards, and a clean lake.  It seems they're getting a little domesticated, like the lost Entwives.  Faramir and Eowyn plan to do similar work in Ithilien.  The Shire, after its cleaning, is going to be more fertile and friendly than ever.  Most of the cast travels back over their route, setting each place in order for the renewal.  (Most authors would not bother with this at all, but Tolkien feels it absolutely necessary.)

The Elves, however, are going to go away.  They have been diminishing for a long time -- I suppose ever since the last war -- and soon only a few will remain.  Gandalf, whose job was fighting Sauron, is going too, and so is Frodo, who is no longer really of the world at all, having been too badly maimed during his quest.  They shall all leave Middle-Earth, and so even in the midst of all this happy renewal, there is a melancholic strain that takes over the end.

I'm very glad Brona decided to host this readalong - it's been great!  Now, I wonder if I should read the Silmarillion, which I have never read at all, nor the Children of Hurin.

As a farewell to Middle-Earth, let's have "Bilbo's Last Song:"

Day is ended, dim my eyes,
but journey long before me lies.
Farewell, friends! I hear the call.
The ship's beside the stony wall.
Foam is white and waves are grey;
beyond the sunset leads my way.
Foam is salt, the wind is free;
I hear the rising of the Sea.

Farewell, friends! The sails are set,
the wind is east, the moorings fret.
Shadows long before me lie,
beneath the ever-bending sky,
but islands lie behind the Sun
that I shall raise ere all is done;
lands there are to west of West,
where night is quiet and sleep is rest.

Guided by the Lonely Star,
beyond the utmost harbour-bar
I'll find the havens fair and free,
and beaches of the Starlit Sea.
Ship, my ship! I seek the West,
and fields and mountains over blest.
Farewell to middle-earth at last.
I see the Star above your mast! 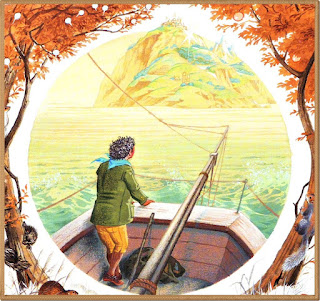