Spin Title: The Heart of Midlothian 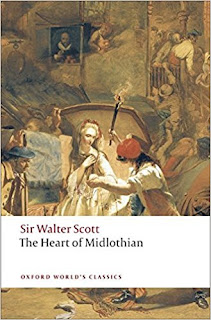 The Heart of Midlothian, by Sir Walter Scott

It's my first Scott novel other than Ivanhoe!  I was expecting some sort of dashing Jacobite adventure, but in fact The Heart of Midlothian is mostly about country people and...a prison.

The story starts off agonizingly slowly, actually.  The first narrator meets a couple of Scottish lawyers, and then describes the Porteous riots of 1736 before mentioning a couple of tiny country houses and the family background there.  It is quite some time before we figure out that the main characters are two sisters, Jeanie and Effie Deans.  After that, though, it gets really good, so stick with it through the first 80 pages or so.

Effie is the pretty, light-hearted, headstrong younger sister in contrast to the responsible, serious Jeanie.  Their father is a respectable cowman, but nearly fanatical in his strict Presbyterian religion.  When Effie finds herself in trouble, she refuses to confide in Jeanie, and after disappearing for a couple of weeks, is arrested for child murder.  Effie is put into the Tolbooth, the cruel 'heart of Midlothian,' to await trial, and the justices plan to use her as an example to others.  She maintains her innocence, but cannot produce the baby.  Jeanie is pressured to save her sister's life by lying in court, and this she cannot do, but she can walk to London in search of a royal pardon!

Jeanie sets out, but things get more complicated than she anticipated.  Why is there a woman on her trail, determined to stop her?  Who is the father of Effie's child, and where is he?  What happened to the baby?   And will Jeanie's own true love misunderstand the things she has to do?  This story actually winds up covering years, so that some mysteries are not solved for a very long time, even until it's too late.

Once I got into the novel, I enjoyed it a lot.  It's got lots of suspense and pathos, and moves along at a good clip.  You have to love Jeanie, who tries so hard to do what is right.  But wow, those first 80 pages are a bear to get through.  You have my permission to skim (though you'll probably want to go back later and read about the Porteous riots again, after learning who is who -- I did and it was a big help).


Scott's odd name for the Tolbooth prison has had quite a legacy.  In Edinburgh, the site is now paved over, and the spot where the gate was (and where executions took place) has a brick heart pattern design.  It is supposed to be traditional to stand on the heart and spit in token of scorn of the debtor's prison that once stood there.  The prison was torn down during Scott's lifetime, in 1817, and a friend of Scott's got him the door and gateway stones, which he put into his kitchen courtyard.  (Just meditate on that for a minute.  Are you kidding me, Walt.)  The "Hearts" are the oldest soccer team in Edinburgh, and their crest is based on the brick heart.

BBC Radio 4 recently did an audio interpretation of this novel, with David Tennant playing Sir Walter Scott.  You can listen to a clip here!  It says there will be three other episodes, and I suppose they'll all be different Scott novels.  It's called The Great Scott.  Of course it is. 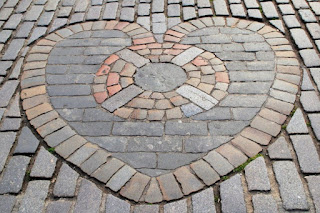