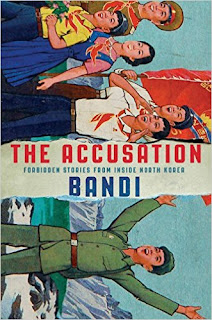 The Accusation: Forbidden Stories From Inside North Korea, by Bandi

Wow, check out what I found, everybody!  This book is a historical event -- it's the first book smuggled out of North Korea.  "Bandi" is a North Korean writer who asked a friend to take these stories out of the country.  While we now have several memoirs written by North Koreans who have escaped, this collection of short stories is, so far, unique.

There are seven stories, plus some information about the writer in an afterword (which I skipped ahead to after one or two stories, I was too curious).  Honestly I was a little worried about how much information was given; it seems to me that it wouldn't be all that hard for the DPRK to identify this man.  I hope I'm wrong about that.  (Looking again, there is a note that says some of the information has been changed to protect him.  Which is better, but also, in that case why put it in?)

The stories are arranged consecutively; they each have a date at the end.  The first has 1989, the last 1993, and I thought that they got progressively more angry and bitter as they went along, as the famine of the 1990s hit and everything worsened.  They are all stories about somebody running into trouble, usually for no reason except accident and the malevolence of the government.  They are gripping and immersive, full of visual detail and a sense of dread behind everything.  What is most touching is an ever-present awareness of the feelings of loved ones, communicated without dangerous words.

Some of the stories:

Gyeong-hee lives in the coveted center of Pyongyang, but such a small thing as her toddler's illness opens her up to suspicion right before a big state celebratiom.

Il-cheol writes to a friend to explain how his discovery of his wife's contraceptives led to his whole world turning upside-down, and then to his defection.

All Myeong-chol wants to do is to visit his sick mother, but he has never been allowed a visit at all.  Now, worried that his mother is dying, he is desperate enough to try anything.

Why did old Yong-su, a decorated veteran who never stops working, scream at government officials, even swiping an axe at them?  They wanted to cut back his elm tree, which for Yong-su has been a symbol of his whole life of endless sacrifice and work for the Revolution.  But all the golden promises he has worked for have never, ever materialized.   (Yong-su reminds me very much of the horse in Animal Farm, though Bandi has undoubtedly never read Orwell.)


Myeong-chol longed to let himself sob out loud, to stamp the ground or shake his fist at the sky.  But, depending on the circumstances, he know that even crying could be construed as an act of rebellion, for which, in this country, there was only one outcome -- a swift and ruthless death.  And so it was the law of this land to smile even when you were racked with pain, to swallow down whatever burned your throat.

Her limbs began to tremble, and not only because of the September chill.  Fear swelled inside her -- fear, something which had to be instilled in you from birth if you were to survive life in this country.  Now, at last, she had the answer to the riddle, understood the force that had moved a hundred thousand people like puppets on a string.

These stories are good literature as well as an important glimpse into a closed world.  Bandi deserves to take a place next to the other great writers who have shown the world the reality of totalitarianism.