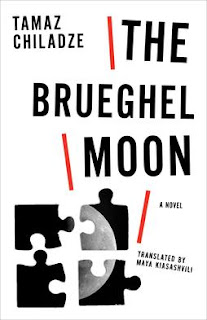 The Brueghel Moon, by Tamaz Chiladze

After reading The Hand of a Great Master some time ago, I was interested in reading more Georgian literature.  The older stuff is not really available in English, but some newer things are; there's a publisher called Dalkey Archive that publishes a bunch of things in translation, and they have a Georgian series.  So I picked The Brueghel Moon without knowing anything much about any of them.  It's very modern.

Levan, a well-to-do psychologist, is taken aback by the abrupt departure of his wife, who tells him that their marriage was just a habit and she was more his patient than his wife.  Left behind, he wanders aimlessly through memories, incidents, and possibly unreal fantasies.  Disjointed chapters feature a woman convinced that she had an affair with an alien, the wife of an ambassador, and strange links between them all.

Interesting but strange and I won't claim to have understood it.   A good experience.
Caucasian literature modern fiction read around the world