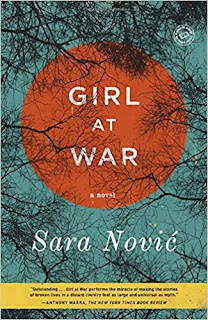 Girl at War, by Sara Nović

In 1991, Ana is a happy, rough-and-tumble girl of ten.  She and her best friend Luka get up to all sorts of things in their beloved city of Zagreb.  When the Yugoslavian civil war breaks out, things slowly deteriorate until Ana's family is caught up directly into the war.

Ten years later, Ana is a college student in New York with a lot of secrets.  She hasn't told anyone about her past, but she finds that she can't leave it behind her, so on a whim, she goes back to Croatia and hopes to find her old friend.  There, she tries to figure out how to confront and absorb the things that happened to her -- which we only discover as she re-lives them.

This is a really absorbing YA novel that is part historical fiction (for an actual YA -- to me it feels immediate) and part coming-of-age, even though Ana is actually an adult.  Having been through what she has been, she had to grow up fast, but is also a bit stuck. Her story, for the moment anyway, is about how to absorb and move on from horrifying events.

Ana is a wonderful, vividly-drawn character.  She is all angles and elbows and weird, angry/awkward silences.  (Dave Eggers could take a few lessons on writing protagonists from this novel.  Ana is a person, while The Circle's Mae is a cardboard figure.)

A worthy YA read.