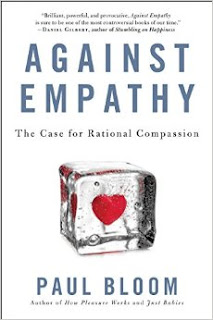 Against Empathy: The Case for Rational Compassion, by Paul Bloom

Paul Bloom is a psychology professor at Yale, specializing in child development and morality (among other things) and I reviewed his earlier book, Just Babies, a couple of years ago.  Here, he tackles empathy: what is it, do we need more or less or it, and what is it good for?  Since more empathy is often said to be the solution for many of our problems, what would that mean?

Part of the trouble is that empathy is a word that is a little difficult to pin down.  Strictly speaking, empathy is entering into the feelings of others; feeling just what the other person feels.  Not the same thing as understanding others' feelings or feeling pity for them, but actually feeling what they feel.   However, the word is often used in a looser sense.  Bloom is careful to differentiate and write about empathy in the strict sense.

So wouldn't it be great if we were all more empathetic with each other?  Isn't that where morality comes from, and the basis of all good policy?  (These are actual claims.)  Well, maybe.  Partly.  Possibly not.  There are a lot of problems with empathy, such as...

It's limited in number.  It's not possible for human beings to empathize with large swathes of people.

Empathy is biased; we tend to empathize far more easily with our own than with others.  It's also narrowly focused, considering just one story at a time.  Empathy is a great propaganda tool, because you can capture votes with a harrowing story even if the numbers show that the most good is achieved through some other method.

Empathy very frequently leads to less-effective outcomes, and can easily result in outright cruelty.  It's easy for empathy to become a warm, fuzzy, self-righteous form of plain old prejudice.

Bloom concludes that empathy, like anger, is a good servant but a terrible master.  He advocates instead for rational compassion that looks carefully at all sides of a problem, weighs the many factors, and tries to come to a fair solution.

An interesting book, and full of things to think about.  I liked it.
non-fiction science