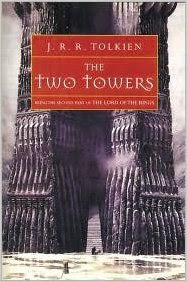 Brona's LOTR readalong has been so very fun!  I haven't read these books in years and (as we all know) they are just so fantastic. And I have a little treat for all lovers of Middle-Earth; my mom sent me a link to this letter from Tolkien, describing various details of things.  It's good stuff: The Tolkien Letter That Every Lover of Middle-Earth Must Read.

In The Two Towers, the Fellowship splits into two groups (well, three for most of it).  Tolkien does this funny thing; where most writers (especially now) would alternate chapters, keeping both storylines going at once, he does not.  He simply splits the book in half and tackles each story separately, which means we are consecutively immersed in each one.  It's quite a shock, halfway through, to suddenly leave Aragorn and company in order to find Frodo and Sam.

Everybody knows the plot, so I don't know that I need to recap it.  Instead I'll just talk about some points that caught my attention this time through.

Ents.  Ents are pretty interesting; their age isn't compared with Tom Bombadil's, but they're older than just about anything else, and they've lost their women.  I think that's just fascinating, how Treebeard tells this story with the men preferring wilderness and forest, and the women going for orderly cultivation, gardens and agriculture, and they wind up completely separated.   The scholarly footnoter theorizes that the Entwives were destroyed during wars in the area that became the Brown Lands -- it's amazing just how much of Middle-Earth is blighted or blasted or poisoned -- but Tolkien always holds out the possibility that they escaped.  The Ents hope to one day find their wives again, but it doesn't seem too likely.  I really like how Tolkien plays on the fundamentally different goals of men and women to create beings that let it go too far; it winds up destroying them.  Marriage seems to me to be this thing where we take these two natures and try to channel them into a shared project of building a family, and the Ents couldn't do it.

Speaking of the Brown Lands -- at the beginning, we mostly see the pretty parts of Middle-Earth, like the Shire, various Elf strongholds, and even Rohan, so I tend to think of it as a beautiful world with this one corner that hosts a growing cancer.  But if you look at a map, that's not true at all.  Huge swathes of this world have already been blasted into scarred sterility by the previous wars of Sauron (Sauronic Wars?) -- there's the lost realm of Arnor, the Withered Heath, the Barrow-Downs and areas around Weathertop.  This world seems to be only about half inhabited, with an awful lot of empty wilderness where no one lives any more.  The Elves are leaving, but the Men aren't doing so well either; they too have been diminishing for a long time.  Instead, goblins are bursting out all over the place.

I'm very fond of the Rohirrim, Saxon/Vikings of the plains as they are.  They're on land, so they don't have ships but horses, and they make a religion of it.  These are people who would write epic poems just like Beowulf.  I bet Tolkien had a lovely time with them.

I like how Faramir shows up and is the only Man able to withstand the temptation of the Ring, and yet Tolkien doesn't make a big song and dance about it; he just slides it in there and leaves it for you to notice.  Even so, the Gondorians' insistence on following their customs exactly leads to trouble, as they force Frodo to lure Gollum in for capture.  Gollum is unable to understand that Frodo acts to save his life, and after that his budding possibility for redemption is squashed.  It seems that forcing people to do things isn't a good idea, even when it's for a good cause.

After I finished The Two Towers, I read the next part of DWJ's essay on "The Shape of the Narrative in Lord of the Rings."  It's very worth reading, and I've had a really nice time with it for an accompaniment.  And now I shall look forward to reading the final volume!