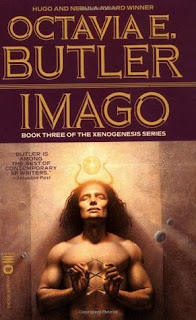 I have now finished the Xenogenesis trilogy, and boy, it's a good read.  It's not hard SF, where you're mostly reading about future technologies and possibilities; this is the kind where a morality problem is set and explored from many sides.

Jodahs is the narrator for this third book, and it is something new again.  It accidentally develops into an ooloi, the third Oankali sex, a specialist in genetic manipulation without which reproduction cannot occur.  The Oankali survive by collecting and using all sorts of DNA, always changing into something a bit different.  But they didn't mean to have a hybrid ooloi so soon in the program, and Jodahs may not be allowed to stay on Earth at all.  Jodahs is desperate to stay and starts wandering too far from home.

There's a lot of really uncomfortable stuff in this book.  Lilith, in the first story, is fully human and embodies our viewpoint when faced with these aliens who do horrifying things to humans without permission, on the grounds that it is moral and necessary.  Lilith is not given a choice about becoming the mother of a bunch of hybrid children, and although she comes to understand the Oankali viewpoint, she never really accepts it and feels culpable for the things she has done.  Her son Akin is able to convince the Oankali to allow a 100% human colony on Mars against their inclination; Oankali morality says that humans should not be allowed to have children because they will eventually self-destruct in violence as a species.  Finally, Jodahs embodies the Oankali viewpoint most and explains it, but in my view he is never really able to make it acceptable to humans.  Too much of what the Oankali do violates human agency and denies choice.  The result, however, is an excellent exploration of choice and consent.