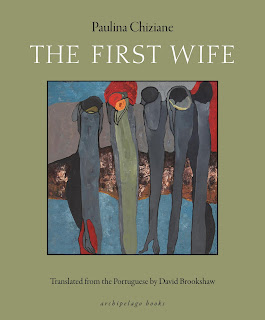 The First Wife: A Tale of Polygamy, by Paulina Chiziane

I was intrigued as soon as I saw this novel.  It's the first published by a Mozambican woman, it's about polygamy, plus it's square, which is fun.  So here we go.

Rami, the narrator, has been married for twenty years, and to a prominent man -- her husband Tony is the chief of police, so they should have plenty for their needs.  But Tony is not around all that much.  Rami finds out that he has another family; in fact he has four mistresses, and most of them have several children.  Rami alternates between rage and hurt, but as she gets to know the other women, they realize that together they might be able to make Tony live up to his obligations.  They maneuver Tony into a polygamous marriage and start to demand their rights, but it's not a straightforward business.

Everything is told from Rami's point of view, and it's kind of stream-of-consciousness.  Rami has a tendency to discourse on the nature of men, women, or love, or anything else, and her moods change often; one minute she's pining for Tony, the next she's raging, so the reader is drawn deeply into her feelings.  She becomes very close with the other wives.  They strengthen and help each other, and resent each other too.  Much is made of the cultural differences between northern and southern women (and men).  The whole becomes an exploration of the difficulties between men and women, the possibly unbridgeable gap between their thoughts and goals, and the promises made and broken.  This is not a novel that offers a lot of hope in the project of marriage.

It's an engrossing, eventful novel with lots of drama, and at the same time, Rami's thoughts make for a repetitious background that may either irritate or provide deeper feeling to the reader.
African literature read around the world WIT August