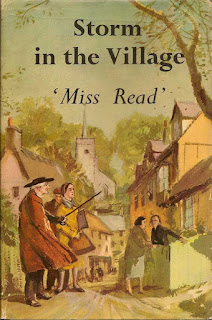 Storm in the Village
Farther Afield, by Miss Read

If you are feeling beset by the world and need a quiet refuge, Miss Read novels are hard to beat.  They're mid-century stories about a set of tiny English villages, narrated by 'Miss Read,' a teacher at the village school.  I read two a little while ago, and have two more waiting for the mood to strike one of these days.

Storm in the Village is the third Fairacre novel, and the (somewhat) peaceful village's life is threatened to be turned upside down if the government forces a local farmer to sell his fields for building a large settlement for power plant workers.  It would be larger than the village, so would children go to the school, or would the school close?  Bring business in, or just an awful lot of traffic?  Mr. Miller vows he'll die before he gives up his best land, and meanwhile there's other drama: a neglected boy runs away from home, and a junior teacher is dead set on ruining her life by falling for a scoundrel.... 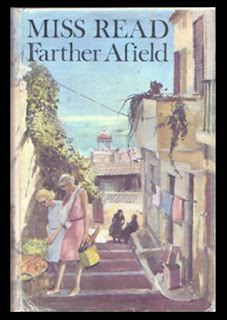 Farther Afield happens much later on (it's #11).  Miss Read is looking forward to a long summer holiday, but the first thing she does is to break her arm.  Her good friend Amy comes to the rescue with a holiday in Crete, but the reasons for it are not all good; Amy's husband is infatuated with a young secretary.  Miss Read and Amy argue the pros and cons of married and single life while enjoying the sunshine.  It's not so much of a comfort read, but it's certainly interesting!
English literature TBR challenge