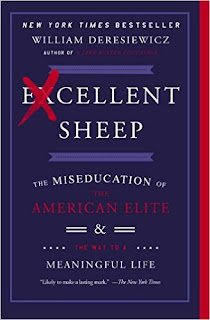 Excellent Sheep: The Miseducation of the American Elite and the Way to a Meaningful Life, by
William Deresiewicz

Several years ago, William Deresiewicz published an online essay, The Disadvantages of an Elite Education, which garnered a lot of attention.  He then turned the essay into a book which I've been meaning to read for some time.

Deresiewicz, a Yale professor, starts off critiquing the ever-more-strenuous race to get into the Ivy League (or even a highly-ranked public school, but mostly the Ivies), and then the conformity seen on campus.  Perfect Ivy candidates do not have time for eccentricity; they have to fit a mold.  I think this is the strongest part of the book, with some excellent points about why we have this system and how it serves the people who benefit, but nobody else.

He then starts asking what college is actually for and what 'leadership' is really about.  There is some good stuff in there, but I did feel like it got kind of repetitive or something; I didn't feel like it was as strong.  There's a lot on what constitutes a meaningful life that really didn't feel terribly relevant, at least to me, so maybe that was it.

Further on, Deresiewicz talks a lot about how our class divides are growing, partly because of this emphasis on elite education.  The Ivies serve the rich; hardly anyone else can afford the massive investment involved in producing an Ivy candidate.  Very few regular non-rich students get in.  Graduates then tend to hire each other into positions of power, because as we all know, an Ivy League education is the best.  The result is a self-perpetuating elite class that only rarely allows others in.

Since this book was published, I am hearing a little more buzz about Ivies looking for non-rich kids who have to get jobs.  But on the whole, the Ivies don't exist to serve the American people and never have.  So why do we assume that only Ivy graduates are qualified to wield power?

It's a pretty interesting read, with some bits I found trite, but overall it's got some good points.

Here's a bit from the article that also appears in the book, to give you an idea:


Elite schools pride themselves on their diversity, but that diversity is almost entirely a matter of ethnicity and race. With respect to class, these schools are largely—indeed increasingly—homogeneous. Visit any elite campus in our great nation and you can thrill to the heartwarming spectacle of the children of white businesspeople and professionals studying and playing alongside the children of black, Asian, and Latino businesspeople and professionals. At the same time, because these schools tend to cultivate liberal attitudes, they leave their students in the paradoxical position of wanting to advocate on behalf of the working class while being unable to hold a simple conversation with anyone in it...
But it isn’t just a matter of class. My education taught me to believe that people who didn’t go to an Ivy League or equivalent school weren’t worth talking to, regardless of their class. I was given the unmistakable message that such people were beneath me. We were “the best and the brightest,” as these places love to say, and everyone else was, well, something else: less good, less bright. I learned to give that little nod of understanding, that slightly sympathetic “Oh,” when people told me they went to a less prestigious college....I never learned that there are smart people who don’t go to elite colleges, often precisely for reasons of class. I never learned that there are smart people who don’t go to college at all.

I'm not actually sure how seriously to take that last bit, as it seems to me impossible to get through life without finding out that there are an awful lot of brilliant people who didn't go to Yale or even Chico State.  Is it possible to live so securely in the ivory tower?  I don't see how.
education