How Not to Hate Your Husband After Kids 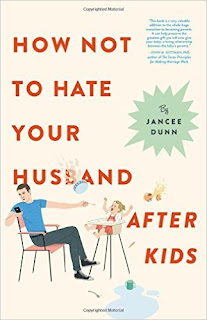 How Not to Hate Your Husband After Kids, by Jancee Dunn

As soon as I heard of this book, I had to have it.  Really, that has got to be one of the best parenting/family-advice book titles of all time.   I had to read it despite the fact that my kids are now teenagers and we have sort of passed the time of small children that this book mostly talks about (and anyway it was still full of good stuff).

Dunn almost comes off as a project author: "I will do X for a year and write a book about it!"  Except, it's not so frivolous; she really did need to spend a year or so working on her marriage and figuring out how to re-negotiate their workloads.  He tended to withdraw and not live up to his part, while she was angry all the time and had a serious yelling problem.

So Dunn tried various things: a marriage counselor who will brutally tell you what's up in one gruelling afternoon, hostage negotiation techniques, and some interesting stuff like that.  She talks about how her marriage improved, and uses that as a springboard to talking about the usual issues: equal chores, getting kids to do chores, money, intimacy, and all that sort of thing.

It is a really, really New Yorky book.  Dunn is a New Yorker and never quite wraps her mind around the possibility that some of her reading audience might not be.  This is a trait of New Yorkers that I find kind of irritating, but it's a general complaint and it's not like the book is ruined.

What I mostly liked was that she really does capture the frustration and yes, rage that I should think nearly all married moms feel every so often.  So I think it's a pretty good read -- one that both women and men can profit by.