Reflections: On the Magic of Writing 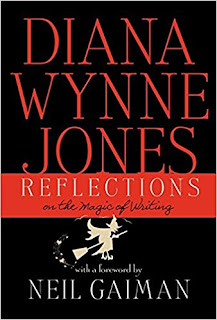 Reflections: On the Magic of Writing, by Diana Wynne Jones

During March Magics, I read a few extra things by DWJ, like Mixed Magics and The Magicians of Caprona, just to round out the experience.  Something Kristen said at the very beginning of the month prompted me to get Reflections out again -- I wanted to look up a particular quotation, and when I couldn't find it right away, I decided to just read the whole thing and enjoy it again.

I did enjoy it, very much.  I think I got more out of some of the essays this time around.  Others are old friends I have read several times by now.  I was particularly impressed by the essay on "The Shape of the Narrative in The Lord of the Rings," and since we're doing the readalong right now, I decided to read that one piecemeal, one bit after each volume.  I just read the part covering Two Towers and I love how she points out what Tolkien is doing.

What I was looking for was a comment on the importance of imaginative literature for children, and the fact that in the early 20th century, there was a vogue for realism in children's literature.  Many, many people believed that children should only read about concrete experiences just like their own lives, and that imaginative works were actually damaging to the childish mind. (I actually did a paper on this in college; I should dig it out and see what I said!)  DWJ's mother seems to have been a victim of this belief -- in fact, one essay says that her father found her little stash of beloved fairy tales and burned them.  Here are DWJ's comments on the wider implications:


I always think it is significant that the generation that trained my mother to despise all fantasizing produced Hitler and two world wars. People confronted with Hitler should have said "He's just like that villain I imagined the other night," or , "He's as mad as something out of Batman," but they couldn't because it was not allowed.

She goes on to comment (in several different places) that we need imagination in order to think about solutions to problems, or new ways of doing things.  If an entire generation is rendered incapable of imagining bizarre and nightmarish evil, how can they deal with it when it actually shows up?  I think that's something worth pondering.

Since this is a collection of pieces written over decades, themes keep popping up and it's possible that some readers will feel it repetitious.  In that case, just read it over time instead of all at once.  I didn't have a problem with it this time.

_______________________________________
And now for my Blogger's Lament: I've been having a terrible time lately making time for blogging.  Every morning, I wake up hoping to be able to write something, and every day, I pretty much fail.  It's kind of bumming me out, but on the other hand, I've been doing lots of other useful things.  I just want to write blog posts too!  At this point, I could write a post every day for two weeks and not run out of books to review.  If you're a mom of demanding teens, please give me tips on blogging while driving kids all over creation.

We've had some good things going on though.  Remember I said I was going to go hiking....well, instead it rained for three days, which made that tricky.  I'm still hoping to go in a few days if things dry out a bit.  Instead, we went bowling, which I haven't done in ages, and that was a lot of fun.  My younger daughter turned 14 (holy moley) and went to her first dance, too.