By Jean - April 11, 2017
It's been a little while, but I'm still plugging away!  Book V is all about Justice, and the knight is Sir Artegall, whom we have already met from Britomart's point of view.  So far he is pretty rough justice, and it seems that he might need some refining.    Spenser explains that Astraea personifies pure, heavenly justice, and Artegall is only the flawed human imitation.  Astraea -- the constellation of Virgo -- raises Artegall and sends him out into the world, and gives him the companion Talus, an iron man with a flail.  Talus is an untiring punisher and sometimes chases down and beats offenders that Artegall can't catch.  He is, in fact, on the brutal side, considering that he's supposed to be given by pure justice!
Artegall's quest is to free Lady Girena (gift? peace?) from Grantorto, a general tyrant sort of fellow.  On his way, he meets a mourning Squire and a beheaded Lady.  The Squire explains that a knight came riding up with a lady and wanted to trade.  The Squire refused, so the mystery knight grabbed the resisting lady while beheading his own.  Talus runs after this man, Sir Sanglier (wild boar).  Artegall pulls a Solomonic judgement and earned the Squire's gratitude, while Sanglier must carry the dead lady's head for a year.

Artegall next meets Florimell's dwarf, who brings the news of her upcoming wedding to Marinell; it's in three days.  Artegall plans to go, but first must defeat the Saracen bridge toll collector, the oppressive Pollente, who cheats and squeezes the poor, and murders the rich for plunder.  The two meet for battle in the river, so Pollente has the advantage.  Even so, Artegall prevails and swops Pollente's head off, leaving it on a pole as a warning against the abuse of power.  He continues on to Pollente's daughter's home; she is Muntera and hoards all that plundered wealth.  Talus beats on her castle door until she sees him and offers him a bribe to go away, but he beats the door down.  He then chops off her golden hands (which sold justice) and nails them up.  Her silver feet go too, and Talus drowns her in mud, burns the treasure, and razes the whole castle.  Finally, they meet a Giant with scales, who plans to distribute all the world equally to everybody.  Artegall argues with him, and the Giant replies that when he is done, everything will be the same; there will be no hills or valleys.  Talus throws him into the sea and then routs all his rebellious followers. 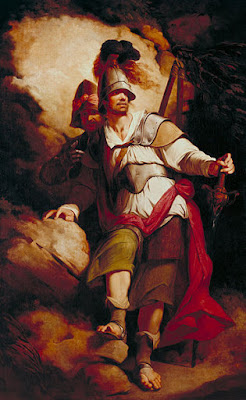 This painting is supposed to be Artegall, backed by Talus with his flail.
It's nothing like how I imagine either of them.  Talus is made of iron!

Time for Florimell's wedding!  First, of course, there must be a tournament, which of course Marinell must win -- at least, until he is taken prisoner on the third day.  Artegall makes the mistake of trading shields with Braggadocio, who then takes credit for all of Artegall's feats of arms.  The False Florimell, who came along, is then unveiled, and all gasp in horror to see identical ladies.  Artegall confronts Braggadocio with his lies and puts Snowy Florimell next to the real one, where she melts, leaving only the magic girdle behind.  Guyon appears to explain about the horse and spear that were stolen from him.  Artegall has to be held back from beating Braggadocio, but nobody worries about Talus doing it and breaking all of Braggadocio's armor.  Then there's a party.

Our hero next meets two brothers fighting over a coffer, while two damsels beg them to stop.  Artegall judges their case, about their respective islands and treasures.  Moving on, he finds a knight about to be hanged by women who run away when seen.  Sir Turpine was taken by Amazons, who made him wear women's clothes and spin.  He preferred hanging.  Radigund, Queen of the Amazons, challenges Artegall to a duel.  Artegall almost wins, but when he sees her face (just like when he saw Britomart), he stops fighting and she renews her attack.  He yields and loses his victory by becoming Radigund's thrall (and possible boy toy).  Talus stays free, but does not rescue his master because Artegall has taken a vow.  Now he's dressed in women's clothes and spinning flax too.  Despite this, Radigund falls in love with her prisoner, and sends the messenger Clarinda to him to see what he thinks.  Clarinda promptly falls for him too, even as he refuses Radigund's favors.  Clarinda lies to both parties, hoping to win Artegall herself.

Although Artegall is behaving virtuously in his captivity, Britomart is consumed with jealousy when Talus brings her the news.  Surely he won't be true to her!  So off she goes with Talus, to seek her knight.  On the way, she meets a quiet knight who offers her his hospitality.  She is too upset to sleep, but the bed is a trap door!  She is attacked, but Talus beats all the knights.  The host is Dolon, whose son was killed by Artegall, and Dolon has mistaken Britomart for his enemy.  She escapes and Dolon drowns in the river.

Well!  What's going to happen next??  Will Artegall be rescued?

The notes point out that Book V is really pretty political, and that Duessa is supposed to be Mary Queen of Scots.

Talus, the iron man, is certainly an interesting figure!  He's got lots of cousins.  The ancient Greeks had Talos (or Talon), a bronze man that protected the island of Crete.  He was sometimes a bull too.  Talos also meant sun.   Talis is the name of the AI computer that takes over the world and enforces order in The Scorpion Rules; I think that's a fairly clear callback.  In general, a name that sounds like Talos is going to refer to a giant, order-enforcing roboty thing.
English literature FQ Readalong poetry