The Death of Vishnu 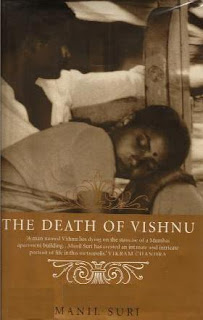 The Death of Vishnu, by Manil Suri

For some reason, I thought this was a post-apocalyptic SF novel.  It is absolutely not.  It is the first in Suri's "Hindu Myths" series, which so far has three volumes; they are unconnected except that they use mythology as their inspiration and symbolic language.

Vishnu is the errand ganga for a block of apartments; he therefore sleeps on the stair landing and lives on a system of tips and perks, but now he is dying.  As he lies there, waiting to die, he (mentally?  symbolically?) ascends the stairs, considering the life stories of each tenant, and possibly attaining godhood along the way.

We get to know each family and personal drama.  The Pathaks and the Asranis constantly quarrel over every little thing, especially over who should pay for Vishnu's ambulance.  Kavita plans to elope with her upstairs neighbor, Salim, but really she just wants to live in a Bollywood movie--her feelings have very little to do with Salim.  Mr. Jalal (Salim's father) has been a trial to his devout wife for years because of his determined disbelief, but now he's obsessively looking for enlightenment.  Vinod lives in the past, reliving his happy years with his wife.  And the radio-wallah has gone a bit mad.  Vishnu also remembers his childhood and his years pursuing Padmini, a prostitute.

It was an interesting novel, and made quite a splash when it was published in 2010, but I didn't love it.  I'm not all that much of a modern literature person and this wasn't really my taste, except that I like books about India!  I may well pick up the next Suri book, The City of Devi, because it actually is sort of an apocalyptic novel, but I may not.
Indian literature modern fiction TBR challenge