I have been reading a lot of Russian stuff lately, so get ready!  This is a book I picked up at the used bookstore, largely because it is part of the Lakeside Classics, which is this odd little series that publishes one volume per year, always a non-fiction title with some connection to American history.  I only have two, and the other one is the Life of Olaudah Equiano.  As soon as I figured out what this one was about, I had to have it!

Julia Grant was a granddaughter of President Ulysses S. Grant.  Her father was also an eminent soldier, and later became an ambassador in the Austro-Hungarian Empire.  Julia grew up quite privileged and spent her late teenage years in Vienna.  There she met a handsome young Russian prince, Michael Cantacuzene (a direct descendant of the Byzantine emperor and a junior branch, so not in the line of succession at all), and married him in 1899. 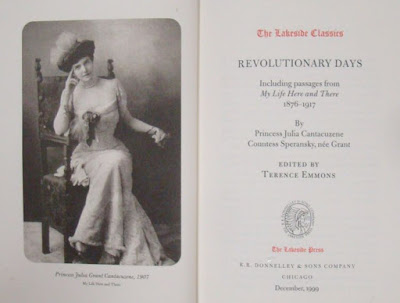 For nearly twenty years, Julia lived the life of a Russian princess.  Her husband did state work and ran the family concerns.  They had a country estate and properties in St. Petersburg and on the Black Sea.  She had three children, and her son attended the posh military academy for young nobles.  They traveled to America to visit grandparents, and generally lived a lifestyle of untold wealth and the responsibility to care for and pass down their estates.

Then the Great War came, and things weren't going so well.  Prince Michael was an eager soldier and all that, but the government started to totter and Tsar Nicholas II was worryingly reclusive and pliant.  The government fell, Kerensky came to power, and finally the Bolsheviks took over.  The family was very fortunate and escaped to America.  That's the ground covered by Princess Julia's memoir.

It's a fascinating first-person account of pre-Revolutionary Russian society through the eyes of an American.  Of course, Julia is always complimentary of her adopted country and her Russian family and friends.  She would never dream of criticizing in public, so don't expect that--and I don't mean to imply that she should.

That's not to say that she doesn't have any strong opinions!  Julia has quite a lot to say on the topic of Madame Vrybova and the circle surrounding the Tsarina (including Rasputin), and their dreadful influence on the Tsar.  She (and, she implies, most of the Russian nobility) believed that the Russian government must liberalize or die, and laments how Tsar Nicholas II would agree to sensible measures with his advisors, and then be persuaded by the Tsarina that autocracy was the only proper way to go.  The direct result was the fall of the royal house.

One really interesting point was that once the royal house did fall, Julia says that most people felt very hopeful about the Kerensky government.  They figured that sure, things would be tricky for a while, but it would calm down, and on the whole everything would be fine and the country would modernize in a liberal, fairly calm way.  The nobility were prepared to acclimatize and go along with the new government, because they already realized that the old autocracy couldn't continue.  But the Kerensky government made some serious errors, and meanwhile the German-funded Bolsheviki were infiltrating and causing all sorts of trouble.  (Julia believed that the Germans planned to destabilize Russia and end their participation in the war by funding the Bolsheviks.  I do not know whether she was right, maybe somebody can tell me?)

This is an engaging memoir; if you're interested in Russian history, it's well worth a read.


And to finish off, here is a poem just for you about John Cantacuzene, Byzantine emperor and ancestor of Julia's husband, by John Bellairs:

Put out the eyes of his
Iconophanical
Prelate, for piercing his
Priestly ear-lobes.
American literature memoir/biography Russian literature TBR challenge