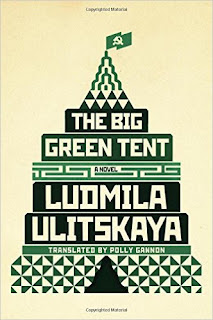 Phew, I wanted to get this very long novel finished in time for the end of Women in Translation month, and I did!  AND this is the second time I've written this post, because Blogger ate the first one.  I hope I can remember what I said.

Three schoolboys become friends in post-Stalinist Russia; so do three girls, in a different class.  Their lives are the lattice for the intertwinings of many characters over four decades.  Many of them are involved with underground activities, the samizdat network or political advocacy.  The story moves around in time, following people through years or decades and then turning back again to other stories.

Although the book cover's blurb focuses on the three boys, I really felt that Olga's story is the center of the novel; although she does not appear in the beginning or the end, she dominates half the book, to the point that parts of her story are told twice or even three times, with different emphases.  You could make a really interesting tapestry by mapping out the appearances of various people.

Most of the main characters are involved in literature, art, or music, but we meet all kinds of people: elderly peasants, wise grandmothers, Party hacks and spies, oppressed Tatars and old soldiers.  Ulitskaya is very skilled at handling the transitions from one person to another, and I sometimes didn't even notice for a while that she'd done it and I was immersed in a different life.  The result is one of those sprawling, complex novels that contains a tremendous amount and which I really enjoyed.  It reminded me of A Suitable Boy or In the First Circle.


What is the big green tent, you ask?  It is only mentioned once, in a dream, but its shadow lies over the whole novel.

I really like the cover, by the way.  It's nice that it's not red, for once (even the little Soviet flag!), and the patterns are kind of quilty, which I like.  (It even makes me happy that nobody tried to make the font extra-Russian by reversing the R or anything.  I wouldn't have expected that, since this is not an 80s movie about the Cold War, but it's still something I appreciate.)

Hey, I know, I'll give you a bonus song!  As long as I'm in a Russian mood--a while back I watched this fun little children's series made in about 1985, called Visitor From the Future.  It was hugely popular at the time, and it's a neat piece of history to watch now.  It's fun, kind of goofy in spots, and very sweet.  This is the theme song with classroom scenes that don't give you spoilers.  Watch it sometime if you get a chance!