Sister Pelagia and the White Bulldog 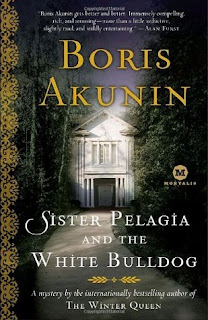 Sister Pelagia and the White Bulldog, by Boris Akunin

I like Russian stories, and I like mysteries, so I should have started reading Akunin years ago.  I did start this one several years back, but I made the mistake of trying to read it on a BART train, and when I failed to get into it, I put it aside and meant to try again sometime.  I finally did, and it was an enjoyable read!

Bishop Mitrofanii, spiritual leader of a country province, has a reputation for solving tricky mysteries.  In fact, it's the unobtrusive Sister Pelagia who does the detecting, and when the bishop's elderly aunt writes to him about the violent killing of her beloved white bulldog, he sends Pelagia off to deal with the problem.  It doesn't seem too important, but Pelagia meets a motley and unusual group of residents at the aunt's estate, and soon realizes that there is a lot at stake.  More dogs are killed, and then people.

The nineteenth-century setting is wonderful.  Akunin excels at creating a vanished world, illustrating a whole social order, and linking it to our own.  He has also done it with his much larger series about Erast Fandorin, a Moscow diplomat and detective.  I'll certainly have to seek out more of his books--especially the next Pelagia title, which involves a haunting by a black monk.  Shades of Chekhov!
mystery Russian literature TBR challenge