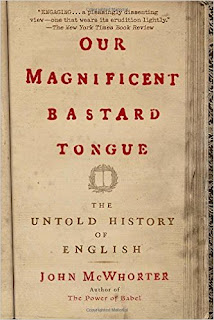 Our Magnificent Bastard Tongue: the Untold History of English, by John McWhorter

Somebody, probably my mother, mentioned McWhorter's name while we were on our UK trip, and then when I got home and went to work weeding the library collection, I came upon this book, so I took it home.

There are a zillion books out there that will tell you about the history of the English language, but McWhorter feels that they're inadequate and do not properly address the why of how the language evolved.  Why, for example, do we say "I'm driving to the park" instead of "I drive to the park" like every other Germanic speaker?  (I have often wondered this myself.)  Why do we say do all the time when it doesn't actually mean anything much?

Well, McWhorter is here to tell you why.  He's got some very strong opinions, and in fact he's rather given to ranting--I think about half of this book is dedicated to rants about linguists who disagree with him and why they are wrong wrong wrong.

He'll take you through the effects that invasions and population-mixing have had on the English language, and he'll explain his theories quite well.  They make sense.  But, as you can figure out from the tone of the book, he's apparently in the minority.

A whole long chapter is also dedicated to arguing over the hypothesis that grammar and language determine thought.  I think this is a bit of a digression from the main thesis, really, but it's pretty interesting.  When people say (I have said it myself) that speaking a different language tends to make your thoughts different too, I certainly never took it to mean anything like what he is talking about here.  I simply meant that thoughts take on a slightly different flavor or shape.  McWhorter takes it more literally than that, but he seems to be arguing with people who also do that, so maybe it's fair.  It's a lot of ranting, though.

The final chapter is really intriguing, and takes McWhorter's theories really far back in time, to Indo-European roots and what prehistoric population mixing might have gone on to make European languages what they are.  That was my favorite part, though I enjoyed almost all of the book.  It just could have used about a third less ranting, is all.  There's plenty of fun theory-spinning to keep any language lover happy!
history language