By Jean - August 09, 2016
I think we have all slowed down just a bit with the Faerie Queene project, but I did keep going!  I decided that I want to post for each half-book instead of waiting to finish an entire book at a time.  I finished the first half of Book III not too long after I got home from the UK, but then I had to get around to writing the post....so after I finish this I'll go back to Book III and see what Britomart gets up to. 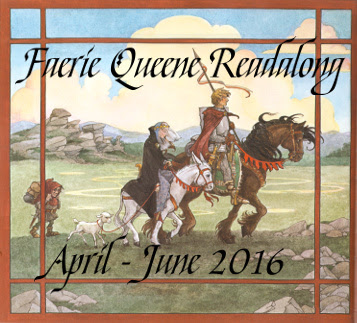 Book III's theme is Chastity, with Britomart its champion.  That doesn't mean that she is never going to get married!  In fact, the whole theme of the book is Britomart's love for her knight (Sir Artegall, who represents Justice).  Britomart has never met him yet, but she's in love and has to learn to control her passions in order to find a true, chaste married love, which is holy, ordered, and fruitful.  She starts off a somewhat clueless teenage girl....but let's take this in order.

Canto I starts with Arthur and Guyon resting at Alma's to recover from their battle.  They send Acrasia off to the fairy court as a prisoner, and then it's back to knight errantry.  Soon they meet a mystery knight (Britomart), who jousts with Guyon, defeating him with her enchanted spear.  They all journey onward as friends until a lady breaks out of the wood, fleeing a grisly Forester intent on no good.  Guyon and Arthur pursue, leaving Britomart alone.  She soon sees six knights attacking one, and jumps into the fray to defend the knight in trouble.  This is Redcrosse, and the six knights are demanding that he love the lady of the castle, which he refuses to do.  Britomart wins the battle and everyone goes in.  The interior of the castle is sumptuous and sensual, with images of Venus and Adonis and a generally Persian flavor.  The lady of the castle welcomes them and invites them to take off their armor; Redcrosse complies (oops) but Britomart refuses.  The Lady, who is Malacasta ('bad chastity') thinks Britomart is a man, and desires her favors, which really throws Britomart for a loop; she doesn't know what to do at all.  Once everyone is in bed, Malacasta sneaks into Britomart's bed in hopes of a snuggle, and the maiden leaps up, grabs her sword, and prepares to defend herself.  Malacasta faints and Britomart receives a small wound, which is significant.


Spenser claims that women used to be warriors all the time, but men got jealous and stopped them.  He portrays Britomart's actions as entirely appropriate and consistent with her maiden status, not unladylike at all.  After all, she's looking for her true love.  She now relates her story to Redcrosse: she is Welsh, the daughter of King Ryence (mentioned in Geoffrey of Monmouth), and has been raised as a knight.  She claims that Artegall has injured her, but this is false; it's that she doesn't know how to describe her feelings.  In fact, she saw Artegall in a magic mirror that Merlin gave to her father.  She fell in love with him, but doesn't even know if he's real or not, much less where he is.  Thus, she pines, worrying her Nurse, who is relieved to find out that her charge just has a normal crush on a guy.  Nurse casts a spell to help.


Spells, however, are unavailing, because this is not lust, but love, and Britomart has it badly.  Nurse suggests that they visit Merlin to ask for advice; it was his mirror, after all.  So we learn Merlin's powers and origin, and they got to see him in his cave.  He knows all about it, and prophesies of Britomart's descendants with Artegall--this is all fated, and they will be the parents of kings and emperors, culminating with the golden age of Elizabeth.  We learn that Artegall lives in Fairyland and believes himself to be an elf, but in fact he is a kidnapped human, Gorlois' son (which makes him Arthur's stepbrother!).  Merlin gives the standard potted history of British kings, including the Tudors (and incidentally, refers to Saxon pagans as Paynims, which is a little confusing).  So: Britomart must go on a quest.  It's Nurse's idea to go disguised as knights--Britomart shall be like Angela, a virgin Saxon warrior maid.  They get some armor and King Bladud's magic spear, which makes them both British and Saxon, and off they ride to Fairyland.

Great warrior ladies of old have got nothing on Britomart!  She is the paragon.  Redcrosse now tells her about Artegall, who she is imagining as perfect (I suspect this will backfire on her).  She rests at the seashore, pondering her situation and complaining that she cannot seem to reach her goal; she is all torn up inside and angry.  This promptly manifests as a strange knight who attacks her.  He smites her breast and she falls, but recovers and attacks back, goring him right through.  This is Marinell, son of a sea nymph and a sailor, and he guards the riches of the sea strand.  A prophecy had foretold that a girl would kill or defeat him.  His mother goes to complain to Neptune, and takes Marinell to be healed.  Meanwhile, Guyon and Arthur are searching for the fleeing damsel, who is Florimell, Marinell's true love.  Also, Arthur does some complaining about wanting Gloriana. 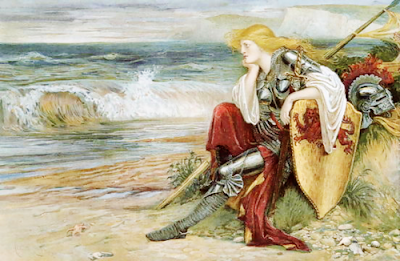 Arthur, wandering in the forest, meets a dwarf who tells him all about Florimell, who has heard about Marinell's plight and gone to find him.  In other news, Timias (Arthur's squire) is still chasing the Forester, who runs off and joins his two equally awful brothers.  The three ambush Timias while he is fording a river, but Timias still manages to kill all of them (though he sustains a 'thigh' injury).  He swoons, and Belphoebe finds him as she is hunting.  She physics him, and he falls in love with her--but alas, he is of lowly estate, and so he despairs and wishes to die.  Belphoebe, all unknowing, worries about his condition.  Is she heartless and cold, or just clueless?  It's not clear.

Now we get Belphoebe's story.  She and Amoret are twins, borne by the fairy Crysonoge, who was impregnated by the Sun as she napped, naked, after a bath.  Dismayed by her mystery pregnancy, she flees to the forest to escape her shame, and goes into a coma.  Venus and Diana find her unconscious, with two babies, so each takes one.  Diana (Phoebe) raises her girl to perfect maidenhood, while Venus raises Amoret to perfect loving womanhood in the Garden of Adonis, which is a pretty fascinating place.  This garden is a paradise and the source of life and regeneration.  Souls--both human and animal--grow here, leave by getting born into physical form, and then return at death to be replanted for 1000 years before going out again.  It's a garden of reincarnation!  Or something.  Only Time is the enemy here; otherwise, all is lovely and frank (which means uninhibited).  There is some very interesting imagery here.  Psyche, meanwhile, adopts Amoret, who becomes the perfect example of chaste (married) affection, and her love is Sir Scudamore.  But...what of Florimell?

For the rest of Florimell's story, not to mention Britomart, Amoret, and Belphoebe, we'll just have to wait.  It's sure getting interesting!