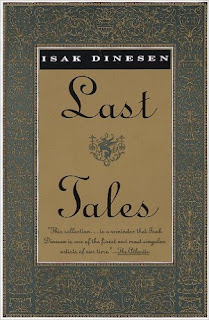 I always enjoy reading Isak Dinesen, and I have just about everything on the bookshelf because I took a course in college that was almost nothing but Dinesen (I did a good bit of Scandinavian literature).  She was an odd duck in her day, and reading her now is almost surreal; the stories are so strange to our sensibilities, especially in this last collection.  She did her level best to write as though she lived in the 18th century, or possibly earlier, and nobody thought more of aristocracy, nobility, or the mysterious power of femininity than she did.

I remember once my instructor showed us a photo of her standing on a stage with Betty Friedan.  Two more dissimilar women could hardly be imagined, and I have to wonder if they'd ever read each other's works (probably not) or if they could possibly have had anything to say to one another.  Karen Blixen was tall, slim, elderly, elegant and proud.  She'd probably put belladonna in her eyes for the occasion.  Betty Friedan was a good deal younger, short and stout in a shapeless dress that emphasized her scorn of fripperies.  The mutual disdain almost radiated from the photo, and I sure wish I could find a copy online for you to see!

Last Tales was originally published in Danish and my copy is listed as a translation, so I'm counting it for Women in Translation month.  Dinesen mostly wrote in English and then translated into her native Danish, so I wasn't at all sure about this title, but they were her last works so maybe she just went with the Danish.  The first several stories were for a novel that was never written.  Then there are two "New Gothic Tales," one of which is unfinished, and three "New Winter's Tales."

The unwritten novel was going to be called Albondocani and the tales belonging to it have an Italian flair, with cardinals and sculptors and intrigues.  (In fact, a cardinal tells two of the stories, which are titled the First and Third--there is no Second Cardinal's Tale.)  Characters frequently say things like:


For the entire being of a woman is a secret, which should be kept.  And one more deep secret to her becomes part of it, one charm more, a hidden treasure...

...as to the shedding of blood, this to our shepherdess--as to any lady--is a high privilege and is inseperably united with the sublimest moments of existence, with promotion and beatification.  What little girl will not joyously shed her blood to become a virgin, what bride not hers in order to become a wife, what young wife not hers to become a mother?

The final tale in this section, "The Blank Page," is a bizarre little story on the power of silence.  (I told my husband the storyline and he was really pretty horrified.)  I don't want to spoil it for you, but it's so short that I thought I could probably find it in full, and so here it is--click and read.

I wondered what Albondocani meant, and the Danish Wikipedia page on Last Tales says it was one of the names of Caliph Haroun al-Rashid in The Thousand and One Nights, which sounds about like something Dinesen would choose, but I can't find any mention of the name connected to Haroun al-Rashid or The Thousand and One Nights otherwise (perhaps it's usually spelled differently?).  Instead, the only other mention of "Albondocani" is a tiny private press, mostly known as a publisher of Edward Gorey's works.  So there's your mystery coincidence of the day for you...and if you know anything about it, tell me!

After that are two "Gothic Tales," which doesn't mean that they have ghosts and bleeding nuns--it means more elaborate and Romantic in the German style, though "Echoes" is about an Italian opera singer hiding out in an Italian village.  "The Caryatids" is unfinished but travels as far as Canada.  Women are the caryatids of the story:


We did not forget our honor, or the honor of our houses, when you went away.  There is not one, no not one, of the women of Haut-Mesnil, who has disgraced her name, the name of our father.  Is it forever, then, the task of the women to hold up the houses, like those stone figures which they call caryatids?  And are you now, Lord of Haut-Mesnil, going to pull down all the stones of our great house, upon your own head, and upon mine, and the heads of all of us?

Like the "Winter's Tales" collected together, the new Winter's Tales are more domestic and set in Denmark, but they are still pretty obsessed with the honor or nobility of old families.  In one, a young squire discovers that he may--or may not--be the son of his old nurse instead of the lord he thinks himself, but perhaps that is only fair.  In another, a young commoner loves his cousin, a countess, and so he despairs.  And in the last, a poet, a prostitute, and a king sit together and converse all night.

It was neat to revisit these stories that I hadn't read in years, and to remember the class discussions we had about them.
classics Scandinavian literature short stories WIT August