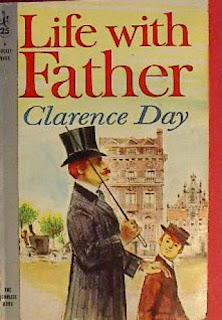 A few weeks ago, somebody posted about God and My Father, a sort of memoir about the time Dad turned out not to be baptized.  It was made into a film and everything.  So I wondered if I could get it, and the library obliged with a collection by Clarence Day of his family memories.

Clarence Day grew up in upper-middle class New York City in the late 1800s; his family was well-off, but not really wealthy.  Day started off in business like his father, but crippling arthritis forced him into a much quieter life and he did a lot of writing, frequently for magazines, but books too.  These books are really funny, written with great affection and understanding.

God and My Father is a real memoir with a plot; it's a comedic story about his father's religious opinions and the family battle over baptism.  Mr. Day was a conventional man who insisted on church attendance, but for the rest he preferred to be left alone to conduct his business as he saw fit.  He was surprised and displeased to discover that his free-thinking father had not allowed him to be baptized, but he certainly wasn't going to do it now!

Life With Father is more a collection of vignettes, possibly written over years for magazine columns.  They detail Day's growing-up years and are just really fun to read.  Life With Mother is just like Life With Father, except that it contains more analysis of Mrs. Day's character and tends to cover later years.  Mr. and Mrs. Day were a very loving couple, each with strong opinions and tempers of their own, and life was never dull under their roof--especially with four boys around.

These were so fun!  I just dipped into the book for a few stories at a time, and it was great; refreshing and amusing, with lots of nice details about life 100 years ago.  I really enjoyed reading these.

Clarence Day is now most known for writing this:


The world of books is the most remarkable creation of man. Nothing else that he builds ever lasts. Monuments fall, nations perish, civilizations grow old and die out; and, after an era of darkness, new races build others. But in the world of books are volumes that have seen this happen again and again, and yet live on, still young, still as fresh as the day they were written, still telling men's hearts of the hearts of men centuries dead.