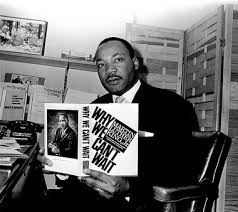 Why We Can't Wait, by Martin Luther King, Jr.

Why We Can't Wait is a fairly short book, elaborating and extending the ideas in the Letter From Birmingham Jail that sits at the center of the text.  King's focus is on the civil rights campaign in Birmingham, its results, and his hopes for the future.  It was written in 1963, after the Letter was published nationally, and published in 1964.  To the modern reader, who probably doesn't need to be convinced of the thesis, it's an inspiring and gripping book that describes a pivotal time in American history.

King starts by introducing the poverty and deprivation experienced by many black children, and moves into the philosophy and methods of the non-violent movement as it played out in other cities before Birmingham.  He then explains that Birmingham was chosen as a focus site for action because it was the most segregated city in the United States, controlled by Bull Connor and his associates.  The rest of the book contains a short history of events in Birmingham and the reasoning behind the leadership's decisions, as well as the Letter.

I never do know what to say about important books written by eminent people.  What could I possibly write?  So: it's a compelling book, and a necessary one for anyone interested in American history or the civil rights movement.
American literature CC Spin history