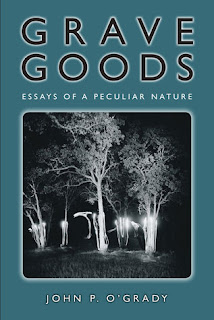 This is an odd little collection of essays on topics that literary academics don't write essays on.  Some of the stories have ghosts, or witches, or strange happenings.

There's a lady who makes and sells magic mirrors, and another one who is a psychic consulted by police (really?  I am skeptical).  In one essay, a country beekeeper announces that the bees are gone because he didn't give them the news properly--this is an old belief, that you have to give the bees the news respectfully--and so they go on a bee hunt and instead find a stone marker of Rip Van Winkle's sleeping spot.  Things like that.

The essays are all about events within the United States, and they often feature natural settings--O'Grady is an environmental writer.  They're things he says happened to him, or to friends of his, or at least that he knows of.

The last essay features a guy who was the night watchman at a San Francisco cemetery that was being dismantled and moved to Colma.  He also wrote poetry.  An elderly lady shows up in the middle of the night and gets him to help her dig up a manzanita plant; she claims it's the last wild manzanita around and so she's going to take care of it before it gets bulldozed.  This puzzled me, since manzanita is a common wild shrub/tree all over California, but then I thought maybe it was some special subspecies--manzanita usually grows in dry climates, not cold, damp San Francisco.  The species is given, so I looked it up, and sure enough, there's a special one native to the area, which is endangered.  (Manzanita is notable for its very smooth reddish bark, which peels off in curls.)

It's a pretty interesting book of essays.  Not especially fabulous, but not a waste of time.
American literature essays