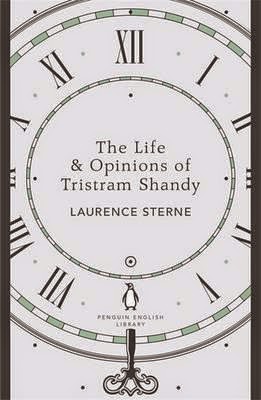 The Life and Opinions of Tristram Shandy, Gentleman, by Laurence Sterne

This is my final book for Adam's TBR Pile Challenge, woot!  I'd been looking forward to it for some time.  I've meant to read this since I read A Sentimental Journey in college, and the TA (who was a friend of mine too, and really cool) told us a bit about the bizarre book that is Tristram Shandy.  There's a black page, a marble page, a blank page.  There are doodles.  And there are diversions and digressions upon digressions, yea verily unto the nth degree.  What there isn't, is very much about the life of Tristram Shandy, gentleman.

We begin with his conception, and it takes fully half the book to get young master Tristram born.  Only four things, all unfortunate, happen to little Tristram and after that, never again does he appear in his own autobiography.  Too many interesting incidents, stories, interruptions, and histories get in the way!  There's always a new rabbit trail to follow.  Even the characters in the book can't tell a story straight; it takes them several tries to get started and we never do hear the promised tale, but something completely other.

The actual main people of the novel are Tristram Shandy's father, and the father's brother Toby who has lived with Mr. Shandy's family ever since he received his terrible wound--which is now probably long healed, but who can say.  The two brothers talk and argue and have lots of little domestic upsets.  Toby is obsessed with the science of fortification and spends all this time thinking about sieges, and there is a friendly widow, and naturally there are lots and lots of bawdy jokes and innuendoes.

It's a completely 18th century novel, and it's also very very modern.  If it weren't for the Georgian language, you'd think it was written in about 1962.

I knew that it was a digressive novel that never really gets anywhere, so I wasn't expecting it to have a plot as such.  That helped.  I quite enjoyed much of it.  But it's a good 600 pages long and about 150 before the end, I kind of ran out of steam.  It took me a while to get going again and mostly I just wanted to finish already.  But I feel very accomplished!
English literature TBR challenge