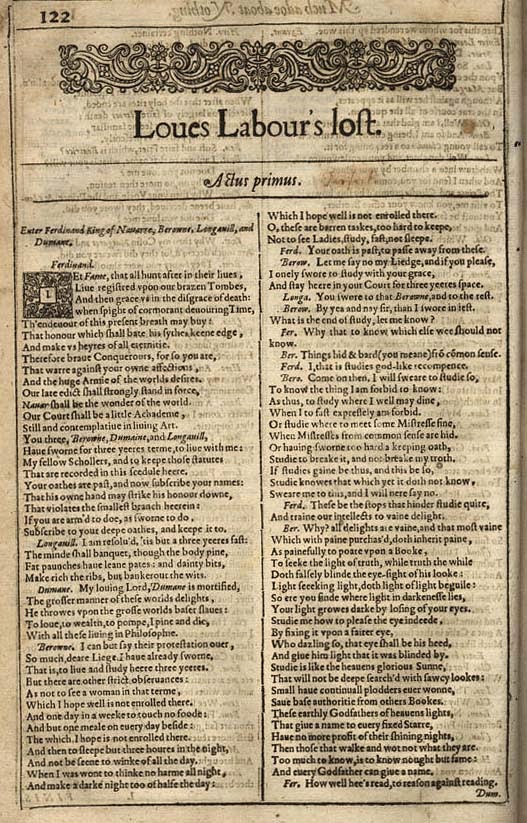 I wanted to hit 90/150 on my Classics Club list by the end of the year (I decided this right before Christmas) so I figured a Shakespeare play would be about right.  I wanted a comedy that I hadn't read before, so I chose Love's Labour's Lost (it was a competition between that and The Merry Wives of Windsor).  After all, I just read a fun mystery that featured a newly-discovered script of Love's Labour's Won (Love Lies Bleeding, by Edmund Crispin, in case you're dying to know).

The plot: Ferdinand, King of Navarre, talks his three best buddies into entering a three-year pact to study hard and practice virtue.  They will eat only plain food, fast once a week, sleep little, and...never talk to any women at all ever.  The impracticality of this silly plan is promptly revealed when the Princess of France shows up--with three of her best friends--to conduct some diplomatic business.  Naturally, each man falls in love with a lady and tries to conduct a love affair without letting his friends know about it.  The ladies are not going to put up with this.  And so on.  The play does not end with a wedding, though; the ladies head back to France on further business, instructing the gentlemen to come for them in a year to prove their fidelity.

The play has some basis in history, and the characters are based on real people.  Ferdinand is Henry of Navarre.  There is a whole lot of wordplay; much of the dialogue piles up the witty puns as high as they'll go (and this being Shakespeare, that is pretty high).  There are comic interludes in the comedy; this must have been a laugh riot in 1595.  I thought it was fun, but it was pretty light and didn't have the same feel as the more famous comedies.
drama English literature