I haven't gotten around to answering the monthly Classics Club meme question lately, so I thought I'd try to jump back in.  December's question:

Did I read any classic works as a child?  Well, yes.  My mother is a children's librarian and storyteller.  Our house was stuffed and overflowing with children's literature--a large percentage of them were library discards, so they were often pretty beat-up even before we got to them.  I was fairly resistant to reading anything that said CLASSIC on it, but I was also unaware that most of the books in the house probably counted in that category. 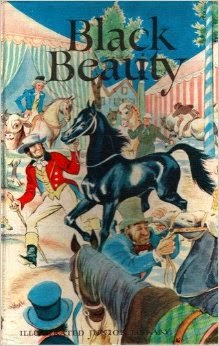 I had 3 or 4 different editions of Black Beauty, and every other horse novel I could get (except The Black Stallion; for some reason I didn't take to those).  We had really nice hardback copies of E. Nesbit's most famous books, and I think we might have been the only kids who did in 1981 Bakersfield; Nesbit was not at all well-known then in the US.  We had ugly paperbacks of the Narnia books that we read to pieces, Tintin and Asterix comics, Wyeth illustrated editions of books like The Boy's King Arthur and The Black Arrow, and all sorts of odd things.

What we didn't have at home we could get at the library: I remember reading all of Andrew Lang's colored Fairy Books there.  Summers were very hot and hardly anyone had air conditioning, so in the mornings we would go to swimming lessons and then walk across an empty lot to the new library, which was nice and cool.  We spent a lot of time there.

The summer I was eight, I decided to read Howard Pyle's Robin Hood, which was a big heavy green hardback tome.  I remember not understanding very much of it, but the illustrations were great.  It took the whole dang summer to read that book. 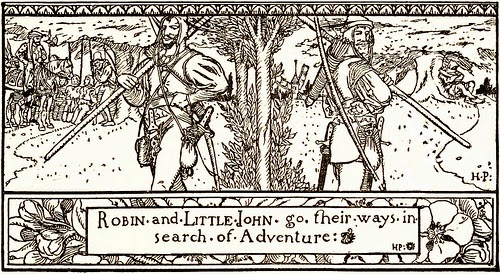 My mom read The Hobbit aloud to us, but I've always been impatient with read-alouds, so I just took it and read it myself.  (I believe very strongly in reading aloud to children for a long time!  But I didn't like it once I could read faster than a narrator could speak.  I still don't like audiobooks for that reason.)

One time the next-door neighbor came over on behalf of her sister, who had a report due on King Arthur.  I ran through the house and collected at least seven King Arthur storybooks of various kinds, and she was dismayed at the pile!  It turned out that the report was due the next day.  (In my head, it was obvious that you would need ALL the King Arthur books in order to write a report on him. I mean, you wouldn't want to miss anything!)

Even the pictures on the walls were from children's literature.  I had a map of Narnia in my room, and my mom had a framed picture of Alice and the Cheshire Cat above her desk.

When it comes to books, I was a pretty lucky kid.
children's literature Classics Club pontificating